China’s FC-31 Carrier Jet Looks Awfully Familiar, If You Can Spot It (It's Stealthy) 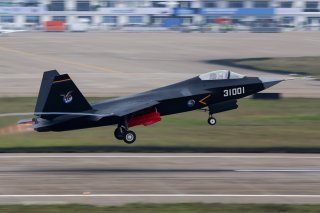 Here's What You Need to Remember: Curiously, the FC-31’s landing gear has a double nose wheel, indicating a possible future on one of China’s aircraft carriers. While dual nose wheels are not exclusively reserved for aircraft carrier jets, they do provide an advantage, as landing on flattops—especially with weapons attached and/or a heavy fuel load—is taxing on an airframe.

In 2012, investigators traced a breach in an F-35 database with a high degree of certainty to China. The breach seemed to focus on the F-35 design, electronic systems, and performance data specifically.

China’s aviation industry has been reliant on foreign designs for their airframe and engines especially. The J-11 fighter is essentially a copy of Russia’s Sukhoi Su-27 fighter. Though initial copies of the airframe were license-built using Russian-supplied kits, later models were likely unlicensed copies.

The J-15, China’a only carrier-based fighter, also draws heavily on the Su-33 and from the J-11. Both designs have suffered in the past from underpowered and unreliable engines, opting to use Russian designs instead when possible.

The FC-31 is just a prototype for now, but may be the successor to the J-15—and it also relies on design elements from other countries, namely the United States’ F-35 Joint Strike Fighter.

In 2012, images popped up online that showed one of China’s newer fighters, the FC-31. It looks somewhat similar to another aircraft—the United States’ F-35 Joint Strike Fighter.

The FC-31 is a stealth fighter. Unlike its more famous cousin, the Chendu J-20, the FC-31 prototype does not have canards, small control surfaces near the cockpit that increase lift and aid maneuverability. These surfaces are inconsistent with stealth designs, thus the FC-31 may in fact be stealthier than the J-20.

Curiously, the FC-31’s landing gear has a double nose wheel, indicating a possible future on one of China’s aircraft carriers. While dual nose wheels are not exclusively reserved for aircraft carrier jets, they do provide an advantage, as landing on flattops—especially with weapons attached and/or a heavy fuel load—is taxing on an airframe. Dual wheels increase an airframe’s robustness and longevity.

As China’s ambitions in the South China Sea have expanded, so has their carrier fleet. There are currently two aircraft carriers in the People’s Liberation Army Navy, the Liaoning, and a similar Type 002 aircraft carrier that is expected to be commissioned this year.

While the Liaoning and the Type 002 both have a ski-jump bow to assist jets taking off, the next two aircraft carriers Beijing is planning will not. Both the Type 003 and the Type 004 will be larger and more modern than their predecessors and have catapult-assisted take-off mechanisms—they Type 004 is even rumored to incorporate an advanced form of nuclear propulsion.

In order to fill these aircraft carriers, China could either build more of the J-15s, which have reliability issues and are non-stealthy, or ramp up production of the FC-31. The stealthy choice would be logical, as China’s other stealth fighter, the J-20, does not have an obvious carrier role.

Stealth on the Flattop

Regardless of which airframe China decides to use to stock its aircraft carriers, the FC-31 appears to be a capable airframe. If previous Chinese engine troubles can be rectified, then the FC-31 seems positioned to excel as a dual-engine stealth fighter. Still, one can’t help but ask, when will China’s fighter designs be completely domestic, rather than based on stolen, copied tech?