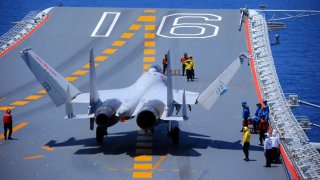 Here's What You Need to Remember: On paper it seems quite capable. It’s a big plane and has a good weapons load out. What can’t be seen from the outside is its biggest weakness—it is underpowered and has unreliable engines, which hinder the J-15’s capabilities. It also can’t be aerial refueled.

The J-15 originally came out of Ukraine. In 2001, China bought an unfinished Su-33 prototype from Ukraine, which it studied extensively. Using this single airframe, and some of the knowledge gleaned from the J-11 (itself another off-brand Sukhoi), China built their only carrier-based fighter.

On paper it seems quite capable. It’s a big plane and has a good weapons load out. What can’t be seen from the outside is its biggest weakness—it is underpowered and has unreliable engines, which hinder the J-15’s capabilities. It also can’t be aerial refueled.

China’s domestic aircraft manufacturing capabilities have typically lagged behind Russian engine technology. The J-11, another Chinese-Sukhoi-copy, suffered development problems as a result of unreliable domestically produced engines, as has the J-15.

The J-15 has been plagued by engine issues and other mechanical problems that resulted in at least four accidents, and the entire fleet of J-15s being grounded for several months. One crash was fatal, and another caused severe injuries to the pilot. The issue is the engines.

The Russian Su-33s are equipped with the AL-31 engines, which are adequately powerful enough for the aircraft. Chinese-developed WS-10 engines were developed for the airframe, but were neither powerful enough for the J-15 to launch from China’s aircraft carrier with a full weapons load, and were unreliable, though recent engine developments may have resulted in an improved version.

Engine upkeep is more difficult at sea than on land. Aircraft have to contend with high temperatures, high humidity, and most problematic—high salinity which is corrosive to airframes and especially to high-performance engine parts. It is possible that this was a contributing factor to China’s J-15 crashes.

The J-15 is one of the heaviest carrier-based planes in the world, and it tips the scales at over 35,000 pounds. However, it is also China’s only carrier capable airframe. For comparison, the U.S. Navy’s F/A-18E/F Super Hornet is just over 32,000 pounds.

Underpowered or unreliable engines are therefore an acute problem for the Chinese Navy. Compounding the problem is the J-15 fleet’s size—there are only around thirty of the J-15s in service with the PLAN.

Beijing is slowly but surely expanding the PLAN and increasing China’s aircraft carrier capabilities. As more Chinese carriers leave dockyards and enter the water, the J-15 would likely be the only aircraft capable of being carrier-based, although there has been speculation that the FC-31, one of China’s fighters currently being developed, could supplement the J-15 fleet, or take over flight operations completely.

A Chinese defense expert was quoted as saying that “once they [the PLAN] make more progress with developing the FC-31, it’s possible we’ll see more drills involving mixed maneuvers using the stealth fighters and the J-15 jet fighters in the future. That would also be in line with practical operations on an aircraft carrier.”

Although improvements have reportedly been made to the J-15 in respect to engines, the airframe still has a reputation for unreliability. If these engine issues have indeed been rectified and made not only more reliable but also more powerful, then eventually China’s naval air abilities would be significantly more capable. If not, then the J-15 could play second fiddle to the FC-31.