China Stole This Fighter Design from Russia. Then the Problems Began. 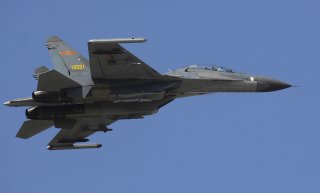 Here's What You Need To Remember: Even though the J-11 designs are capable, their capabilities are also somewhat limited. The designs that they were based on are from the late 1970s—making them nearly forty years old. They are also not stealthy—and crucially do not support aerial refueling which is a severe hindrance.

Even though the J-11 designs are still applicable to 21st century warfare, their capabilities are also somewhat limited. The designs that they were based on are from the late 1970s—making them nearly forty years old. They are also not stealthy—and crucially do not support aerial refueling which is a severe hindrance.

Caleb Larson is a Defense Writer with The National Interest. He holds a Master of Public Policy and covers U.S. and Russian security, European defense issues, and German politics and culture. This article appeared earlier this year.