A Closer Look at the Pentagon's New Concept of 'Integrated Deterrence' 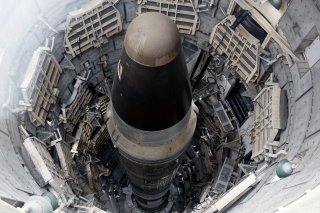 Here's What You Need to Remember: Adm. Charles Richard, Commander of the U.S. Strategic Command, emphasized missile defense as indispensable to any kind of a deterrence equation and specifically warned about Chinese and Russian advances in the areas of missile defense and nuclear weapons.

“The Department of Defense, following Secretary Austin's vision, is pursuing this larger pole by developing the concept of integrated deterrence. So to achieve integration, every capability in every domain must be considered. Some people like to think about nuclear as if it somehow exists in its own separate box sitting off here to the side,” Adm. Charles “Chas” Richard, Commander of the U.S. Strategic Command, told an audience recently at the Space and Missile Defense Symposium, Huntsville, Alabama.

Richard, who is in charge of the U.S. nuclear weapons arsenal, made the point that nuclear weapons are inherently paradoxical or even self-contradictory, but extremely effective. Richard said nuclear weapons could achieve their maximum effectiveness by existing in large numbers, but never being used. That is the point, and many advocates for a robust U.S. nuclear weapons capability make the point that, since the dawn of the nuclear era, there has not been a global great power conflict on the scale of World War II. Millions died in World War II, and while warfare has continued, the threat of nuclear annihilation, many believe, is the principal reason major global superpowers have not gone to war with one another. This dynamic, Richard emphasized, needs to be fully woven into any kind of deterrence-oriented defense strategy as the two can reinforce and impact one another.  The foundation of integration deterrence can be identified as being essentially “multi-domain.”

Missile defense is a huge part of this, as should one major power believe it can achieve overmatch or superiority when it comes to a nuclear engagement, that could massively increase risk and drastically threaten the status quo. With this in mind, Richard emphasized missile defense as indispensable to any kind of a deterrence equation and specifically warned about Chinese and Russian advances in the areas of missile defense and nuclear weapons. Should any major power have reason to believe they could potentially prevail in some kind of nuclear exchange, due to highly advanced or superior missile defense technology, the threshold to nuclear war might be substantially lowered.