Does the Boeing X-40 Hint at the Future of the U.S. Space Force? 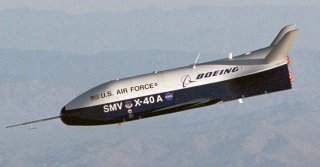 Here's What You Need To Know: The X-40A was not the first step in a reusable space plane, a concept that had predated the original Space Shuttle by decades. The experimental scaled-down aircraft was also just one part of the efforts to develop a reusable spacecraft that could be used in low Earth orbit missions.

One key point about the X-40A that Cummings would like to set straight is a longstanding myth that the unpiloted X-40, which was, in fact, built to 85 percent scale of the X-37 to test aerodynamics and navigation systems, utilized a drag or drogue chute.