Friendly Fire? NATO Could Have Battled French Mistral Carriers in a War With Russia 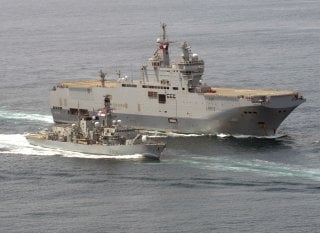 Here's What You Need To Remember: After protracted negotiations, Paris paid back in full Moscow’s advance payment and sent back the Russian-built equipment. Russia also kept 150,000 pages of technical documents, which may inform the design of two planned domestic Priboy (Surf)-class amphibious carriers.

Mistrals come at roughly half the price of the U.S. Navy’s Wasp-class LHDs at around $600 to 700 million, and thanks to a high degree of automation can function with 160 crew instead of the Wasp’s 1,000. This theoretically should make them appealing for export.