Future Warfare: What Comes After the F-35? 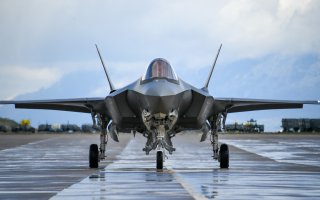 Here's What You Need to Know: The military is already looking beyond the F-35 stealth fighter.

The Air Force and the Navy both fly the 5th generation F-35 jet, with the Air Force also being the sole user of the F-22 Raptor, perhaps the world’s stealthiest jet fighter. Despite the airframe’s dominance, work is already underway on a 6th generation fighter.

Little is known about either the Navy or Air Force 6th generation fighter programs—and this worries the House Armed Services Committee. According to work done on the Fiscal Year 2021 defense policy bill, up to 85% of the funding requested for the NGAD programs could be withheld until an independent review is done.

But what are the programs like? Though both branches’ programs share the same name, Next Generation Air Dominance, this is where the similarities likely end.

The Navy effort is cloaked in mystery, though it would replace their F/A-18E/F Super Hornets. The Super Hornets are not particularly old, but the design is considered unstealthy despite measures made to reduce its radar cross section. Survivability at sea against stealthy aircraft in the future is questionable. The Navy’s replacement is tentatively called the F/A-XX.

In order to free up funding for the F/A-XX program, the Navy would like to cut back on future Super Hornet orders, reducing their 2021 order of thirty-six down to just twenty-four airframes. The savings freed up by buying twelve less Super Hornets would then be rolled over into the F/A-XX budget in future years. The House Armed Services Committee wasn’t sold on the idea however and urged the Navy to not cut back on Super Hornet orders.

On the other hand, the Air Force wants to take a different approach, what they call the Digital Century Series. The name hearkens back to the so-called century series of jets designed as the United States entered the jet age.

A number of different companies quickly designed and prototyped the new century series jet designs, and fast. Familiar airframes like the F-100 Super Sabre or the F-105 Thunderchief are several notable examples. Market competition resulted in a high number of jets that were rapidly prototyped and put into service and enabled the United States to field a relatively wide array of airframes with differing capabilities.

The rapidity with which new designs were drawn up and then entered service stands in stark contrast to newer programs like the F-35, which proceeded at a glacial pace, taking over a decade from inception to adoption.

Rather than building up new technologies over time, the digital century series would ask America’s aerospace industry to use existing technology to rapidly get the best possible airframe into service in just a few years. Competitions would be held every few years and new fighters would quickly be put into service.

Whatever the final design of the Air Force and Navy’s Next Generation Air Dominance programs, they’ll both have to convince Congress that their plans are worth the cost. Though not much is known about the NGAD, watch this topic closely as new developments come forth.