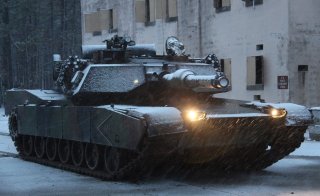 Here's What You Need to Remember: There is, at least at the moment, nothing in the world of lightweight composites ready to truly replace or match the protective functions of heavy armor, and the materials built into the Armata may not be fully known.

While it may at times be a challenge to sift through a lot of the hype and hyperbole surrounding Russia’s T-14 Armata tank, the war vehicle does appear to present a series of very significant threats to U.S. and NATO forces, should some of its reported attributes be accurate.

The T-14 Armata tank is also listed to include other assets such as an unmanned turret, three-man crew, twelve-round per minute firing range and 125-millimeter smoothbore cannon. The platform is also reported to operate without a “fume extractor” and protect the three-man crew with an armored capsule.

Over the years, the T-14 Armata has received a lot of press hyping its various attributes, yet it is not at all clear how much these technologies have been tested or placed in actual war-like scenarios. A news report from Sputnik several years ago reported that tank-maker Uralvagonzavod has developed a “remotely-detonated” 125-millimeter shell for the T-14 Armata. A report in Popular Mechanics from several years ago says the T-14 Armata’s now-in-development 3UBK21 Sprinter missile can hit ranges more than seven miles, according to the report. The Armata’s current round, the 9M119 Reflecks, has a range of 3.1 miles (roughly comparable to the current Abrams tanks) and can penetrate up to nine hundred millimeters of armor, Popular Mechanics notes. However, there do not appear to be any test reports or analyses about the performance of the T-14 Armata in wargames or live-fire events, meaning it is not clear how much verification there may or may not be about its weaponry.

While, quite naturally, the range and particular technical capabilities of the U.S. Army’s emerging tank sights are not available for security reasons, several Russian news reports, such as the GRU Pycckoe report that the new Russian T-14 Armata’s thermal targeting sights are able to discern tank-size targets during the daytime at ranges out to five kilometers. The same report states that the nighttime sights can reach 3.5 kilometers.

Yet another report cites a wide range of attributes of the Russian T-14 Armata, to include specific comparisons to the Abrams tank, yet much of its characterizations may lack context. The report, from hotcars.com, presents a number of interesting technical facts about the Armata, including its 1,500-2,000 horsepower diesel engine. The article argues that its engine is more powerful than an Abrams tank due to its having a better thrust-to-weight ratio, meaning that a 1,500-horsepower Armata engine drives a 55-ton tank, whereas an Abrams 1,500 horsepower turbo gasoline engine powers a heavier tank at 70-tons. However, while the hotcars.com report cites the Aramata’s Afghanit Active Protection System, claiming it is extremely advanced, it seems very unlikely that a fifty-five-ton tank would in any way be comparable in terms of survivability compared with an Abrams tank.

There is, at least at the moment, nothing in the world of lightweight composites ready to truly replace or match the protective functions of heavy armor, and the materials built into the Armata may not be fully known. Also, while the Abrams tank does have a Trophy Active Protection system, that does not necessarily mean heavy protective armor should disappear, at least not yet. Therefore, power-to-weight ratios, speed, and mobility-enhancing weight may not matter much if a tank is quickly cripppled, disabled, or destroyed by incoming rocket-propelled grenades, anti-tank missiles or other kinds of incoming fire. While survivability details regarding exactly what an Abrams tank can withstand may not be available for security reasons, it seems possible that a more heavily armored Abrams might be in a position to better withstand enemy fire.