Iran's Military Is Armed to the Teeth with Lots of Missiles 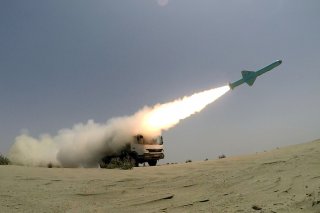 Here's What You Need To Remember: Iran’s missile collection is quite remarkable and draws on lessons gained during the Iran-Iraq war. During that conflict, Tehran learned that it’s cheaper and easier to have a strong defense (many varied missiles) than a strong offense, such as airplanes that are expensive, require lots of maintenance, and could result in pilot deaths.

Missiles are an essential tool of the Iranian regime. They are used for power projection, particularly towards Iran’s neighbors, or for anti-access/area-denial closer to home, in particular over the Strait of Hormuz and the Persian Gulf. Tehran’s missile collection is among the most diverse in the Middle East because Iran relies on modifications to Soviet/Russian and Chinese designs—although there are some domestic improvements thrown into the mix. Iran has thousands of short and medium-range missiles, and could very likely hit targets as far away as eastern Africa, Eastern and Southern Europe, Russia, India, and western China. Here are some of their most potent designs.

The Fateh-110 development program started in the mid-1990s. Testing continued through the late 1990s and early 2000s, with serial production commencing around 2003. It has a range of about 210 kilometers (about 130 miles), with a suspected 500 kilogram (approximately 1,100 pounds) warhead. It is road-mobile when installed on mobile launchers, which were likely modified from other launch platforms to handle the Fateh-110.

Iran claims it has the ability to mass produce the Fateh-110. It has also been rumored that Hezbollah was supplied with some number of Fathe-110s from Iran, though this is difficult to confirm, as Israel destroyed a large inventory of Hezbollah munitions in strikes during 2007.

Closer to home, the Shahab-1 is essentially a variant of the Russian SS-1 Scud missile, which is itself similar to the Nazi-developed V-2 Rocket that terrorized Britain during the Second World War. Like the SS-1 Scud, it is liquid-fueled, and has a range of about 330 kilometers, or just over 200 miles.

The Iranian Shahab-1 originated during the 1980s conflict with Iraq. Iran needed something with greater reach than provided by available artillery and wasn’t willing to risk its fleet of aircraft. (Many of Iran’s airframes were—and still are—vintage American planes, so servicing them with spare parts is problematic.)

Iran turned to Libya and Syria for missiles, launchers, and transporters. After the war with Iraq, Iran wanted a domestic production capability and turned to North Korea for expertise. Today, Iran possesses a variety of Shahab-1 variants with differing ranges, payloads, and accuracies.

The Sejjil is speculated to be a domestic Iranian design, in contrast to most of Iran’s missile arsenal, which is wholly or partially based on other countries’ designs.

One of the advantages of the Sejjil missile is its fuel type—solid-propellant instead of liquid. This is advantageous due to solid fuel rockets greater robustness and speed of deployment. In contrast to liquid-fueled missiles that require a greater deal of preparations and specific launch conditions. (For instance, historically liquid fuel has to be kept quite cool, resulting in a large energy requirement.) If paired with a mobile launcher, the Sejjil would be a large, powerful, and rapidly-deployable threat.

Iran’s missile collection is quite remarkable and draws on lessons gained during the Iran-Iraq war. During that conflict, Tehran learned that it’s cheaper and easier to have a strong defense (many varied missiles) than a strong offense, such as airplanes that are expensive, require lots of maintenance, and could result in pilot deaths.