Is Israel Ready? Iran Is Upgrading its Drone Arsenal 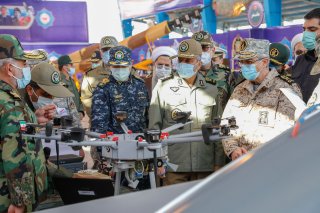 Here's What You Need to Remember: It’s unclear how many Fotros drones the IRGCGF might acquire and how exactly the force might deploy them. But the drone-acquisition is consistent with a broader effort by the IRGC to field more high-tech weaponry.

Karimloo said his division would get the drones from the Iranian defense ministry. Iran fields two separate armies. The regular armed forces technically are secular and train to defend Iran. The IRGC has a religious mandate and carries out missions on foreign soil on behalf of Iran’s “Islamic revolution.”

“Following extensive meetings with the defense ministry and evaluation of features of the homegrown drone, the IRGC Ground Force’s drone division has decided to utilize Fotros in operational zones,” Tasnim News Agency stated.

It’s unclear how many Fotros drones the IRGCGF might acquire and how exactly the force might deploy them. But the drone-acquisition is consistent with a broader effort by the IRGC to field more high-tech weaponry.

The IRGC Navy in mid-April 2020 claimed it had acquired ship-launched anti-ship missiles with a range as far as 430 miles. As recently as September 2019, the militia said its best anti-ship missile could travel just 180 miles, Defense News noted.

“The IRGCN vessels repeatedly crossed the bows and sterns of the U.S. vessels at extremely close range and high speeds, including multiple crossings of the Puller with a 50 yard closest point of approach and within 10 yards of Maui‘s bow,” the U.S. Navy stated.

On April 22, 2020, U.S. President Donald Trump wrote on Twitter that he was authorizing the Navy to “shoot down and destroy” Iranian boats that harass American vessels.