It's not a Pancake, that Weird Disk Attached to the Plane is a Radar System 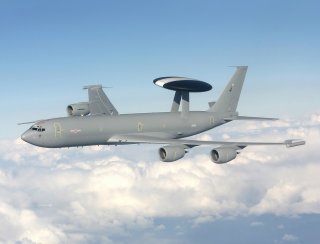 Key point: For the next sixteen years, however, the large manned radar planes will continue to play an important role in NATO’s air defenses—one in which its member states cooperate together upon to an unusual degree.

Instead, the aircraft is owned by NATO as part of the NATO Airborne Early Warning and Control Force (NAEWC), with two squadrons with crews drawn from sixteen member states: Belgium, the Czech Republic, Denmark, Germany, Greece, Hungary, Italy, Luxembourg, the Netherlands, Norway, Poland, Portugal, Romania, Spain, Turkey, and the United States. In 2018, Canada announced it would also begin dispatching crews again for NAEWC.

NATO has also arranged facilities to forward deploy its E-3s to bases in Konya Turkey; Aktion, Greece, Trapani, Italy, and even Ørland, Norway. France and the United Kingdom also sometimes contribute their E-3D and E-3F aircraft to support the force.

After the 9/11 attacks, NATO E-3s flew patrols off U.S. airspace and were then sent to Afghanistan to provide flight control support of air operations.

In a meeting of foreign ministers in Brussels in November 2019, NATO Secretary-General Jens Stoltenberg authorized $1 billion more in funding to develop and implement a final update. This is a 33 percent increase over an earlier speculated figure of $750 million

NATO plans to retire the E-3 aircraft in 2035 but doesn’t know what their replacement will look like. It’s moved onto the second phase of a program in which its solicits industrial partners to help develop a conceptual replacement known as the Alliance Future Surveillance and Control (AFSC).

NATO has only issued extremely vague pronouncement about what it envisions for its E-3A replacement, but some of the issues it will seek to address are easy to identify.

The simplest replacement might simply be to procure, smaller, cheaper, and more modern replacements like the Boeing 737-based E-7 Wedgetail, already in use with the Turkish Air Force and on order with the British Royal Air Force.

For the next sixteen years, however, the large manned radar planes will continue to play an important role in NATO’s air defenses—one in which its member states cooperate together upon to an unusual degree.

Sébastien Roblin holds a master’s degree in Conflict Resolution from Georgetown University and served as a university instructor for the Peace Corps in China. He has also worked in education, editing, and refugee resettlement in France and the United States. This first appeared in 2019.