More Firepower Than an Aircraft Carrier: Why the B-2 Bomber Rules 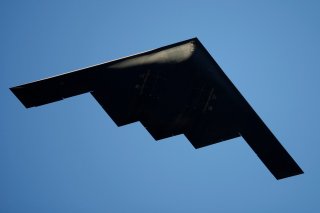 Here's What You Need to Remember: “The B-2 is one of the most game-changing aircraft ever built…and one of the most cost-effective. One B-2 can deliver the punch of an entire aircraft carrier air wing at several orders of magnitude less in operating cost and personnel,” Deptula said.

When B-2 stealth bombers attacked Serbia on the opening night of Operation Allied Force in 1999, destroyed Iraqi air defenses during 2003’s “Shock and Awe” and eliminated the Libyan fighter force in 2011 -- the attacks were all guided by highly-specialized pilots trained in stealth attack tactics.

Given the dangers of these kinds of missions, such as flying into heavy enemy ground fire from air defenses, confronting the prospect of air attacks and preparing for electronic warfare over hostile territory, B-2 pilots need to be ready. For this reason, the Air Force is working to ensure that pilots are prepared to fully leverage upgraded digital targeting technology.

“We prepare and train every single day in case we get called up tomorrow,” Lt. Col. Nicola Polidor, Commander of Detachment 5 of the 29th Training Systems Squadron, told Warrior in an interview.

While performing missions, B-2 pilots need to maintain the correct flight path, align with specific targeting intelligence and load and prepare weapons, all while manning a digital cockpit to control a wide range of additional variables at one time. Polidor, who trains future B-2 pilots at Whiteman Air Force Base in Missouri, says Air Force pilot trainees have adjusted well to learning a seemingly overwhelming amount of new information.

“The biggest challenge for pilots is being able to manage flying for long periods of time at the same time as managing a communications suite and robust weapons package,” Polidor said.

Polidor is only the 10th female B-2 pilot in history.

Training is broken down into an academic phase and a flight phase, with classroom training as the first step. Trainees, Polidor explained, typically spend about two months working on a simulator, before taking their first flight.

“At anytime it is understood who is at the controls. The instructor pilot will have hands on the controls, without moving anything….in case the trainee has a problem,” Polidor said.

Part of the glass cockpit in front of the pilot is one of eight displays called the Digital Entry Panel which enables pilots to check hydraulics, electronics, flight controls, environmental conditions, weapons suite.

“It is like a flying computer. You enter text into the computer. We can input the pressure, airspeed or target for a weapon from that panel and send it,” Polidor said. “We have autopilot just like a commercial airliner. We are able to maintain altitude without our having to input into the computer system."​

Despite flying more than 40-hour missions, pilots have no bed and no refrigerator, just two seats in a small cockpit and a small area behind them about the same width as the seat. Pilot’s food, Polidor said, needs to be non-perishable items.

Deptula, who was involved in planning and preparation for Operation Iraqi Freedom, talked to Warrior about the warzone importance of the B-2.

“The B-2 is one of the most game-changing aircraft ever built…and one of the most cost-effective. One B-2 can deliver the punch of an entire aircraft carrier air wing at several orders of magnitude less in operating cost and personnel,” Deptula said.

Kris Osborn is a Non-Resident Fellow at The Mitchell Institute for Aerospace Studies. Osborn previously served at the Pentagon as a Highly Qualified Expert with the Office of the Assistant Secretary of the Army - Acquisition, Logistics & Technology. Osborn has also worked as an anchor and on-air military specialist at national TV networks. He has a Masters Degree in Comparative Literature from Columbia University.