New Chinese and Russian Weapons: Can the U.S. Military Compete? 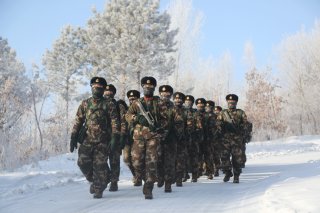 Here's What You Need to Remember: While no one is advocating any move to cut corners or decrease the effectiveness of weapons development, the idea is to leverage newer technologies, realize the competitive global environment, and move new platforms to completion on an expedited, massively accelerated basis. This is already happening, as the Air Force’s prototype sixth-generation stealth fighter has taken to the sky years ahead of schedule.

The pace at which China is adding carriers, destroyers and amphibious ships is staggering, the Russians reportedly already operate hypersonic missiles and possibly even satellite-launched missiles and both Iran and North Korea seek advanced nuclear weapons such as intercontinental ballistic missiles (ICBMs) and tactical nuclear-armed rockets.

China is already working on a second and third indigenous carrier and plans to double its fleet of destroyers within just the next five years. Russia and China have both made fast progress modernizing their respective nuclear arsenals.

All of these well-known realities continue to provide new urgency to the longstanding refrain that the U.S. military is in desperate need of more effective acquisition reform. The idea, which has actually circulated for decades as a huge, yet largely unrealized priority, may actually be happening now thanks to computer simulation, digital engineering and rapid prototyping.

The Pentagon has, finally, actually re-written its famous Defense Department 5000 acquisition procedural and legal manual. The specifics of the rewrite might not as of yet be available, yet the development is likely a welcome move for many who have been seeking to streamline lengthy acquisition milestones often unnecessarily set apart by years.

While no one is advocating any move to cut corners or decrease the effectiveness of weapons development, the idea is to leverage newer technologies, realize the competitive global environment, and move new platforms to completion on an expedited, massively accelerated basis. This is already happening, as the Air Force’s prototype sixth-generation stealth fighter has taken to the sky years ahead of schedule.

The intent is not so much to circumvent essential procedures, safeguards and certifications, but rather to concurrently accomplish numerous functions, which have previously been spaced years apart and often stalled by cumbersome, bureaucratic and sometimes unnecessary traditional acquisition procedures.

How is all this happening? Rapid advancements in digital engineering, for example, enable the Pentagon’s weapons developers to assess multiple design models of new systems such as new ICBMs, stealth fighters or even armored vehicles through digital computer modeling without having to spend years building and testing multiple competing prototypes. This technique is not only gaining traction but already producing substantial results.

It is on the way to being used in an even greater capacity, Alan R. Shaffer, the Pentagon’s Deputy Undersecretary of Defense for Acquisition and Sustainment, said at the National Defense Industrial Association's virtual Interservice/Industry Training (I/ITSEC), Simulation and Education Conference, according to a Pentagon report.

“The same technologies . . . you investigate at I/ITSEC (Simulation and Training)  are the ones that will allow us to move to an agile and adaptive acquisition framework and be much more agile,” Shaffer said in the essay. “Digital engineering, digitization, modular open systems architecture and model composability are all key within the I/ITSEC community They’re also the bedrock for an agile acquisition framework and will provide us the tools we need to cut development time,” he said.

Shaffer went on to explain that simulation can also assist weapons development through wargaming and threat assessments, the kinds of exercises that test and assess advanced Red (enemy) forces against Blue (friendly) forces.

“We should be able to do a much better job in assessing to be fit for purpose by use of simulation and the performance of red versus blue systems and simulators to really understand how what we are going to buy in the Department of Defense will operate in a real world,” he said.