North Korea's New Tank: Here's What We Can Surmise So Far 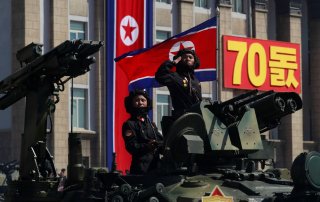 Here's What You Need to Remember: Clearly, North Korea would like observers to think that their new tank incorporates the latest in composite armor, though this is difficult to confirm. One of the conclusions that can be drawn about the tank’s armor protection is the rear turret and rear hull’s slat-style armor which is intended to minimize damage caused by high explosive anti-tank (HEAT) type munitions—effectual but not modern.

Although western sources have not given the new tank a specific designation yet, several conclusions can be surmised from the tank’s brief parade appearance.

This is likely North Korea’s most advanced tank and appears to incorporate several features seen on other advanced main battle tanks like the United States’ M1 Abrams, or Russia’s T-14 Armata tank.