Project Icarus: In Case of Armageddon NASA Had an Action Plan 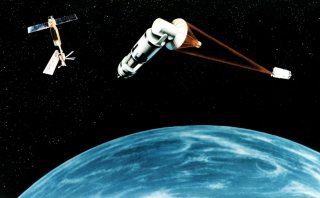 Here's What You Need to Remember: The final plan created by the students at MIT involved sending a series of six or seven nuclear-armed missiles towards 1566 Icarus in succession. Each of the missiles represented a chance to save Earth, with the first missile launched perhaps a couple of months before estimated impact, and the final opportunity a mere 18 hours before 1566 Icarus hit Earth.

Students hypothesized that some of NASA’s heavy-lift Saturn V rockets would be able to carry a nuclear device close to 1566 Icarus’ orbit and detonate just before impact. The students thought that a 100 megaton nuclear bomb would be sufficient to alter the mile-wide asteroid’s orbit away from Earth. There was, however, a small problem.

The final plan created by the students at MIT involved sending a series of six or seven nuclear-armed missiles towards 1566 Icarus in succession. Each of the missiles represented a chance to save Earth, with the first missile launched perhaps a couple of months before estimated impact, and the final opportunity a mere 18 hours before 1566 Icarus hit Earth. Here’s to hoping 1566 Icarus—or any other potentially hazardous interstellar object never requires launching nukes into space.