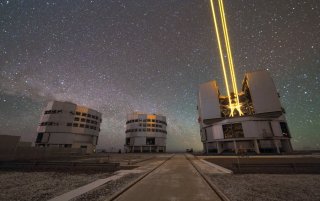 Here's What You Need to Know:  Lasers could at some point fire directly from satellites to burn holes in ICBMs either in space, during a beginning boost phase, or during the terminal phase as it is closing in on a target.

Space-based anti-missile laser weapons call many military possibilities to mind. After all, there are already different lasers built, some more often discussed than others. For instance, is well known that lasers are being explored for intercontinental ballistic missile (ICBM) defense in space. Moreover, the Missile Defense Agency officials told The National Interest that weapons developers are now working on “power-scaling” laser systems to engineer weapons strong enough to incinerate enemy missiles in space. This not only requires range but also power systems sufficient to generate the desired effects.

Where would they fire from? Well, that is a fascinating question that is already receiving a lot of attention. Lasers could at some point fire directly from satellites to burn holes in ICBMs either in space, during a beginning boost phase, or during the terminal phase as it is closing in on a target.

Also, the Pentagon is developing surface ship-fired lasers strong enough to travel out to the boundaries of the earth’s atmosphere. Engineers at firms like Booz Allen Hamilton are already doing conceptual work on the possibility of building new kinds of hardened, space drones or unmanned systems able to travel beyond the earth’s atmosphere for missile defense, surveillance, or even attack missions.

All this being considered, there is a lesser-known application fundamental to laser weapons which bring substantial tactical possibilities to space war. This is using lasers as optical sensors, according to experts with the Air Force Research Laboratory working on new technical systems.

Using lasers for optical or surveillance missions brings a number of potential tactical advantages. Not only do lasers travel at the speed of light but they are scalable, meaning they can be engineered to destroy, stun or disable. They can also, as Felt explained, be used to detect, surveil, or even jam enemy weapons, objects, and networks.