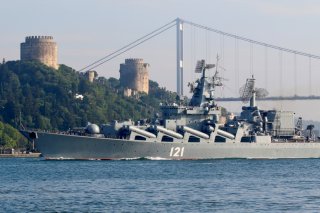 Amid mounting military tensions in the Arctic region, Russia’s Northern Fleet is holding large-scale drills in the Barents Sea.

The Northern Fleet’s press office issued a statement earlier this week that noted the Petr Veliky battlecruiser had conducted wide-ranging drills in the Barents Sea region north of Russian and Norwegian coastlines. “At sea, the warships practiced maneuvering in a deployment order, searched for a notional enemy’s submarine in interaction with Ka-27 anti-submarine warfare helicopters and Il-38 aircraft," the press office said. The drills, which were overseen by Northern Fleet Deputy Commander Vice Admiral Oleg Golubev, also included minesweeper operations and efforts to counteract high-speed boats. The Barents exercises are the latest in Russia’s recent flurry of military exercises in the Arctic.

Petr Velikiy is the flagship of the Northern Fleet and the largest currently-serving surface combatant ship in the world. It is the fourth and sole operational Kirov-class battlecruiser in the Russian Navy. The first two—Admiral Ushakov and Admiral Lazarev—fell into disrepair in the years following the Soviet collapse and are slated to be scrapped in 2021. The third, Admiral Nakhimov (formerly Kalinin), is in the midst of a repair and refit cycle and will reportedly re-enter service in the Northern Fleet in the early 2020s. Petr Velikiy is armed to the teeth, boasting twenty onboard P-700 Granit anti-ship missiles and several different types of anti-submarine warfare (ASW) rocket systems. It likewise can carry naval variants of the S-300 air defense system, and will reportedly be upgraded with a naval version of the system’s S-400 successor. The battlecruiser will also be refitted with Russia’s new 3M22 Tsirkon winged hypersonic cruise missiles, further enhancing its ability to threaten U.S. carrier strike groups.

From Petr Velikiy to the Admiral Gorshkov advanced frigate, the Northern Fleet is home to some of Russia’s most capable surface warfare ships. It also hosts all of Russia’s remaining Delta-IV nuclear ballistic missile submarines, which are due to be replaced in the coming decades by the new Borei class of strategic submarines. The Northern Fleet helms Russia’s naval presence in the Arctic. The fleet’s capabilities and composition have ballooned over the past several decades, in proportion with the Putin administration’s growing security interests in that region.

The Northern Fleet’s Barents Sea drills come amid a new wave of “concerns” in Washington over Russia’s military activities in the Arctic region. “We have concerns about some of the increased military activities in the Arctic. That increases the dangers or prospects of accidents . . . and undermines the shared goal of a peaceful and sustainable future for the region,” said Secretary of State Antony Blinken at a press conference in Reykjavik, Iceland, last week. The Kremlin remains unfazed. “We hear whining about Russia expanding its military activities in the Arctic,” said Russia’s Foreign Minister Sergey Lavrov prior to his May 19 meeting with Blinken. “But everyone knows that it’s our territory, our land. We bear responsibility for the Arctic coast to be safe, and everything our country does there is fully legitimate.”