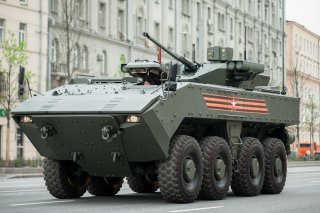 Here's What You Need to Remember: Like the United States’ Stryker wheeled vehicles, which can serve in a variety of roles, including anti-aircraft air defense, mobile gun anti-tank, as well as reconnaissance, the Bumerang is also expected to fill several roles.

The Bumerang, one of Russia’s newer projects, is an amphibious infantry fighting vehicle. Based in part on the older Soviet BTR designs, the Bumerang has a number of innovative features.

The Bumerang breaks with its Soviet predecessors in a few ways. One of the more noteworthy design features that the Bumerang benefits from is a relocated forward engine compartment.

Not only does the engine relocation provide somewhat better protection to the Bumerang’s crew, but it also facilitates egress from the rear via a rather wide hatch. The older Soviet-era BTR family of amphibious armored personnel carriers typically had side and top hatches, making a quick exit difficult, and leaving passengers dangerously exposed.

Like the United States’ Stryker wheeled vehicles, which can serve in a variety of roles, including anti-aircraft air defense, mobile gun anti-tank, as well as reconnaissance, the Bumerang is also expected to fill several roles.

The Bumerang comes with a remotely operated turret, the same turret in use with the Armata T-15 heavy infantry fighting vehicle, and with some of the Kurganets-25 armored personnel carriers. When mated to the Bumerang platform, the turret is equipped with either a 30-millimeter main gun and anti-tank missiles, or a larger 57 millimeter auto cannon and medium machine gun.

There has been speculation that the Bumerang could be adapted into an anti-tank role by mating a larger main gun to the Bumerang’s turret, which if true would turn the platform into a wheeled tank. In this role the Bumerang would not be dissimilar to some of France’ Cold War-vintage turreted gun cars, though the Bumerang would benefit from a substantially more robust armor protection package.

Although dismounted infantry would likely benefit from the additional firepower a wheeled light tank would provide, efficacy against more heavily armored targets like main battle tanks is questionable.

Thanks to recent developments in the Russian defense industry, the Bumerang may see higher production numbers than originally anticipated. Recent reporting has pointed out that production of the tracked Kurganets-25 is to be indefinitely delayed thanks to the manufacturer’s failure to “deliver both in terms of performance characteristics and in organizing for mass production.”

This might just be the opening that allows the Bumerang to step in. Watch the topic for more information on the Bumerang in the future.