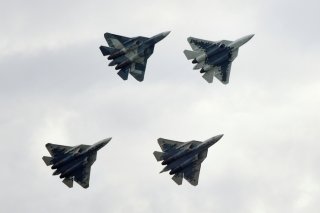 Here’s What You Need to Remember: Though it is true that the Su-57 supports a formidable suite of air-to-air and anti-ship missiles, it is not at all clear that Lockheed Martin’s F-35 Lightning II fifth-generation fighter lags its Russian counterpart in this department.

In an interview given earlier today to Russian state news outlet TASS, prominent Russian military expert Alexei Leonkov averred that the Su-57 fighter outperforms the U.S. Air Force’s fifth-generation offerings in virtually every category. "The Su-57 outshines them by now in terms of the amount and diversity of armament. On top of that, the latest solutions, such as the second pilot as a system that facilitates aircraft control and combat operations, a spherical all-around radar that ‘sees’ everything, and cutting-edge electronic warfare systems aboard the Su-57 leave the US rival far behind," he said.

Though it is true that the Su-57 supports a formidable suite of air-to-air and anti-ship missiles, it is not at all clear that Lockheed Martin’s F-35 Lightning II fifth-generation fighter lags its Russian counterpart in this department. Going purely off the number of unique weapons options available to both fighters, the opposite appears to be the case—especially considering the F-35’s Block IV revision, which will integrate several new bomb and missile choices including the B-61 Mod 12 nuclear gravity bomb. As for Leonkov’s second point, the F-35’s radar-sensor suite is among the most advanced of its kind in the world. The F-35’s sensor fusion package gives it the unparalleled ability to act as a “quarterback in the sky,” generating a dynamic picture of the battlefield that can be fed to nearby friendly units.

"For a long time, it had been believed that only F-22 and F-35 planes can be referred to as fifth-generation but these aircraft lack low radar signature and therefore can be shot down," Leonkov continued. Despite these claims, the F-35 has among the lowest radar-cross sections (RCS) of any fighter in service today—the Lightning II boasts a frontal Radar Cross Section (RCS) comparable to that of a metal golf ball, translating into class-leading stealth performance. Russian experts have long maintained that Moscow’s latest missile/air defense systems—namely, the S-400 Triumf and S-500 Triumfator-M—are capable of generating a “weapons quality” track on U.S. stealth fighters, but these types of claims remain uncorroborated and are difficult to evaluate in the abstract.

TASS noted that Leonkov was asked to comment “on some Western media’s claims that Russian aircraft lagged behind the American F-22 and F-35 planes,” though it did not cite the western articles in question.

Russian president Vladimir Putin announced in the summer of 2019 that Russia’s Defense Ministry plans to procure as many as seventy-six Su-57 units, following the Kremlin’s reported success in driving down the fighter’s price by as much as twenty percent. The first serially-produced Su-57 was delivered to the Russian air force in December 2020.