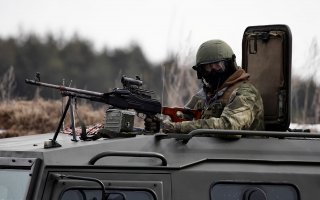 Here's What You Need to Know: The PKM is still the standard squad automatic weapon in the Russian Army.

The Soviet-designed PK family of machine guns was originally designed in 1961 and is still in use. Its standard ammunition was designed even earlier — in 1891.

Keep on Keeping On

Prior to the PK, the Soviet Union had two main machine guns, the SG-43, and the DPM. The SG-43 was very bulky and heavy, and required at least two men to carry the gun, ammunition, and mount.

In contrast, the DPM was operable by one man and was fairly robust, but its large drum magazines were also bulky and unreliable. The DPM was also very long and not maneuverable.

Due to using drum magazines, its rate of fire was comparably slow when compared to other machine guns of the era that were belt-fed. The DPM’s bipod was also fragile.

When in need, turn to the greats.

The Soviet Union called upon the famed arms designer Mikhail Kalashnikov of AK-47 fame to design a replacement for the World War II area machine guns.

Kalashnikov decided to use some of the design features from the AK-series of rifles. The cartridge, however, was even older. Due to proven design and a large amount of widely-available surplus, the 7.62x54mmR cartridge was chosen.

The 7.62x54mmR was originally designed in 1891 to serve the Tsar’s armies, who had been equipped with Mosin-Nagant rifles. It’s performance was comparable to .30-06 round that served the United States with distinction in the Second World War and in Korea.

Although it is a rimmed cartridge, meaning it has a protruding lip at the base of the cartridge, it is not an inherently unreliable design. It is the oldest cartridge still in production that is standard-issue.

The PK is robust and reliable and also relatively light. With a bipod, it is under twenty pounds, a very manageable weight for a single solider. It is easily recognizable with its rust-colored wooden buttstock, and AK-style pistol grip. It comes with a second barrel to facilitate quick barrel changes during extended firing. Much of the receiver is stamped rather than milled, to be both lighter and cheaper/quicker to manufacture.

In 1969, the PKM variant was introduced to Soviet arsenals. The PKM is lightened, weighing only 16 and a half pounds with a bipod. It is still in service with the Russian Federation, where it serves as a crew-served weapon on some armor and is still the standard squad automatic weapon in the Russian Army.

Uzi: The Israeli Machine Gun That Conquered the World