Russia's Su-25 is Becoming the Next A-10 Warthog 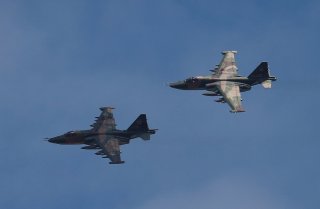 Here's What You Need To Remember: The Su-25's design can place it firmly within the role of close air support fighter.

Like the A-10 Warthog, the Su-25 makes extensive use of titanium, using the metal’s lightweight and high strength to protect the pilot. The pilot sits in a bathtub-like armored cockpit, surrounded by welded titanium plates. This armor protection is absolutely essential. Close air support airframes need to fly relatively slow and low to target ground-based troops and tanks and are therefore much more exposed and at a greater risk from small-arms fire and surface-to-air missiles than their fighter jet or bomber compatriots.

Also, like the A-10, Sukhoi’s Su-25 comes equipped with an underslung 30-millimeter cannon below the cockpit. The large cannon is loaded with 250 armor-piercing rounds that can take out main battle tanks in addition to thin-skinned vehicles like the ubiquitous technical often encountered on modern battlefields around the world.

The Su-25 also has five hardpoints under each wing for carrying a variety of munitions, including precision and unguided bombs, as well as air-to-ground missiles and rocket pods. During the Su-25’s early years, a number of failures occurred due to firing full rocket salvos and may have been caused by the jet’s engines ingesting hot rocket exhaust gasses.

The Su-25 platform was completed in time for service with the Soviet Union during the Soviet-Afghan war, a geographic location where close air support is absolutely essential. The jet also saw very limited service with Iraq, who imported the airframes from the Soviet Union. The jets were woefully underpowered and outgunned compared to the American fighter jets they faced and likely did not score any combat kills.

One of the combat theaters where the Su-25 saw widespread service was during the First Chechen War. During combat, the Su-25 was criticized for using a large number of unguided munitions in dense urban areas and likely caused extensive civilian casualties. The platform suffered few combat losses thanks to the dearth of effective Chechen air defenses.

The Su-25 design may be enjoying a bit of a renaissance. A company in small post-Soviet Georgia says that it is primed and ready to make the design. It may be very ready to restart production, as Georgia was the Su-25’s original build location. Though the company claims to have the necessary capacity, both in terms of human capital and industrial capacity, it remains unclear if there is a demand for the older Soviet design on today’s arms markets. If there is, then the Georgian firm could cash in; if not, then it could be an economic black hole.