Russia's Tu-160 Isn't Stealthy, But Otherwise It's Off the Charts 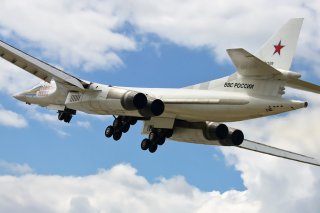 Here's What You Need To Remember: The Tu-160 is outwardly somewhat similar to the American Rockwell B-1 Lancer which spurred its development. Both have variable-sweep wings, both are supersonic. However, that is where the similarities end.

The B-1 Lancer is somewhat smaller and is a bomber in the classic sense. The Tu-160, on the other hand, is used more as a stand-off weapons platform, in which missiles are launched from the bomb bay doors while the “White Swan” would speed off at Mach 2+ to safety. It is the only Soviet-designed bomber that does not carry any defensive weapons, although its prodigious 88,000 pounds of payload capacity can carry a dizzying array of conventional and/or nuclear weapons.

Variable sweep wings are no longer in vogue but offer some advantages. (Check out this F-14 Tomcat for a prime example of variably swept wings!) During low-speed flight, like landing or takeoff, a straight wing offers more lift. At higher speeds, especially in the supersonic range, a straight wing causes unnecessary drag, and a steeply swept wing would be more efficient. Hence the variable-sweep capability of the Tu-160: it “unfolds” its wings at lower speeds, and “folds” them when flying supersonic.

Caleb Larson is a Defense Writer with The National Interest. He holds a Master of Public Policy and covers U.S. and Russian security, European defense issues, and German politics and culture. This article appeared last month.