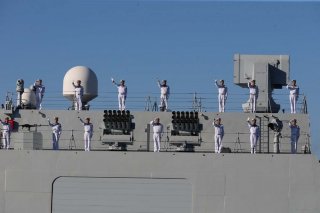 Here's What You Need To Remember: There's no question that China has dramatically ramped up its naval defense spending, and tried to build partnerships abroad. However, the United States is still way ahead on both counts.

Peter Suciu is a Michigan-based writer who has contributed to more than four dozen magazines, newspapers and websites. He is the author of several books on military headgear including A Gallery of Military Headdress, which is available on Amazon.com. This article first appeared in June 2020.