These Weapons Made World War I Hell on Earth 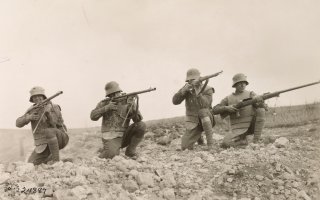 Here's What You Need to Know: The war to end all wars drove a lot of innovation.

When the First World War began in August 1914—some thirty days after the assassination of Arch Duke Franz Ferdinand of Austria—no one expected a prolonged war that eventually would see the deaths of tens of millions of men in the front lines, or that it would bring down three of the ruling dynasties of Europe.

The Great War—as it was known to contemporaries—is also often overlooked for being the first truly modern war that saw numerous technological advancements. While it was the Second World War that ushered in the atomic and jet age, the First World War arguably made those advances possible, as military planners looked to new and more lethal ways to break the deadlock. This included the use of aircraft, submarines, poison gas and armored vehicles like the tank.

However, World War I was also notable for its numerous innovations in small arms, which is why so many died on the mud-soaked battlefields of Europe and beyond. It has been stated many times that it was the lack of understanding of the potential killing power of the weapons by those in charge that led to the carnage. The main killer was of course the machinegun.

While the machinegun was already in the arsenals of the great powers and had seen use in numerous conflicts it wasn’t until the outbreak of war in August 1914 in which European armies truly discovered the devastating power that this new weapon possessed.

The concept of rapid fire had been proposed since the earliest days of firearms, but early pioneers were hindered by the fact that muzzle loading guns were slow to load. Designers thus sought multi-barrel weapons and the earliest attempt at “machinegun” was born out of such a design when Richard Jordan Gatling patented the first controlled, sequential fire weapon in 1861. Named for its inventor the Gatling Gun saw limited use in the American Civil War and the Franco-Prussian War, and the potential for sustained fire was unveiled. It subsequently saw use in various colonial engagements, but it was Sir Hiram Maxim’s invention that would truly have an impact on future conflicts.

The Maxim gun, which was invented in 1884, was the first self-powered machinegun. It utilized the recoil power of the previously fired bullet to reload a new round into the chamber rather than being hand-powered. This enabled a much higher rate of fire than was possible using earlier designs, but this came with numerous shortcomings including the fact that the single barrel could overheat very quickly. To resolve this issue Maxim also introduced the use of water cooling via a water jacket around the barrel. Maxim’s design proved so successful that it was widely adopted and derivative designs were used on all sides during the First World War.

The Germans produced the Maxim under license as the Maschinengewehr 08, or MG-08, and it served as the primary heavy machinegun of the German Infantry Divisions. It had a practical range of 2,000 meters and an extreme range of 3,600 meters, which was more than enough to mow down advancing forces in no-man’s land.

While it has largely been argued that the military planners didn’t foresee its killing potential this is likely vastly overstated especially as the Germans had some 12,000 MG-08s available for battlefield operations in August 1914. This clearly indicated that the German planners did know what it could do! In fact, in 1914 some 200 MG-08s were produced each month, but by 1916 the number increased to 3,000 a month and a year later that number reached an astonishing 14,400 per month. Clearly the age of the machinegun was at hand!

The British and French also saw the potential for the machinegun, and the former had relied on the Maxim in its colonial wars where it not only proved effective but inspired the Anglo-French writer and historian Hilaire Belloc to note: “Whatever happens, we have got the Maxim gun, and they have not.”

The British developed their own version of the Maxim in the years just prior to World War I and the result was the Vickers, which actually purchased the Maxim Company outright in 1896. The Vickers design reduced the weight, simplified the action and introduced components made of high strength alloys. There was one drawback to the improvements; it resulted in shortages when the war broke out and thus the British were still equipped with older Maxims.

The French Army, which also gets knocks for being a bit behind the times, had been in fact undergoing military reforms when the war broke out. This in part explains why its soldiers marched off to the front lines in uniforms that were visually little changed from that of the French Army under the Second Empire that fought the Prussians in 1870. The baptism of fire in the opening months of the war resulted in numerous changes for the French.

Just as it was looking at uniform and even helmet designs prior to the war the French had been experimenting with small arms. As a result, when the war started it was relying on a number of machineguns including the largely forgotten Puteaux Model APX 1905 machinegun, which was proved to be a disastrous attempt at changing what wasn’t really broken when it came to Maxim’s proven designs; and the St. Étienne Mle 1907, a gas operated, air-cooled machine gun that used the 8mm Lebel round common in the French infantry rifles. While not derived from the Hotchkiss—as often stated—it was actually an update of the Puteaux. While not as poor a design as the Puteaux, the St. Étienne Mle 1907 proved unsuccessful and was in turn pulled out of action in favor of what would prove to be a reliable design in the Mle 1914 Hotchkiss machinegun.

This was the last version of a series of nearly identical designs that dated back to the Mle 1897. The design was sturdy and reliable and remained in active service with the French army until the early 1940s, when France was defeated on the battlefield during the Second World War.

Of course the machinegun design that proved to be a true game changer was that of a late arrival to the battlefield—the American designed M1917 Browning machinegun, a weapon that served through both World Wars, Korea and even saw limited use in Vietnam. The .30 caliber belt-fed water-cooled machinegun also led to the development of the air-cooled Browning M1919 and the larger .50 caliber M2 machinegun.

Birth of the Assault Weapon

While the first true “assault rifle” wasn’t created until the Germans developed the StG44/MP44 during the Second World War, the truth is that the first assault style weapons were very much developed prior to and during the First World War. The use of artillery and the machinegun created the situation where on the Western Front—and to a lesser extend along the other front lines—movement became static and crossing even a small amount of ground was akin to a suicide attack.

One problem was that while the machinegun proved to be an excellent “defensive” weapon it was not exactly mobile. Weighing nearly 100 pounds without the mount, the Maxim couldn’t easily be moved forward with advancing troops; while the vast majority of infantry soldiers were armed with bolt action rifles.

French military arms designer Colonel Louis Chauchat considered the problem and designed a “light machinegun” prior to the war. The design was refined and the result was the “Fusil Mitraileur Modele 1915 CSRG”—but more commonly known as the Chauchat. Today this firearm has a notorious reputation for being unreliable and even poorly designed.

However, much of this could be due to the fact that the weapon was supplied to American troops in 1918 and many of those were well-used models that were past their prime. The firearm was actually reasonably reliable but only if properly maintained and cleaned.

Moreover, due to strategic demands the weapon’s construction had been simplified to facilitate mass production, and it was often produced using low quality metal components. Likewise a seemingly innovative design proved a flaw in the muddy conditions—this was the open magazine, which was originally designed to allow the shooter to monitor the flow and supply of ammunition.

The fact is however that the Chauchat, which featured a pistol grip, in-line stock, detachable magazine and selective fire capability proved to be innovative features at the time. The weapon weighted just 20 pounds and could be fired from the hip and while moving. In many ways the Chauchat was arguably the first true assault weapon, even if not the first “assault rifle.”

The British too looked to a more mobile machinegun and developed the Lewis Automatic Machinegun, or simply Lewis Gun. It featured a distinctive wide tubular cooling shroud and a top-pan magazine. This gas operated machinegun had a rate of fire of 500-600 rounds per minute and it weighed twenty-eight pounds, so it was heavy but still manageable. While it was issued to the British Army’s infantry battalions on the Western Front as a replacement for the Vickers machinegun, it actually proved to be a rather successful machinegun for aircraft!