What Is a Ukrainian T-84 Tank Doing in Arizona? 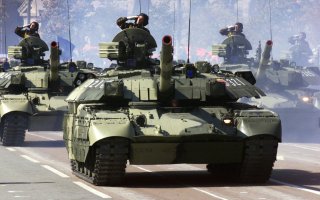 Here's What You Need to Know: It's common for Yuma to acquire foreign-made vehicles to train U.S. troops.

(This article first appeared in February.)

A Ukrainian T-84 main battle tank (MBT) has reportedly arrived at the Yuma Proving Ground, Arizona, but for what exact purpose it isn’t entirely clear, although it is likely to familiarize American soldiers with the platform. It wouldn’t be the first time the Ukrainian-built variant of the Soviet T-80 MBT has been seen at an American military proving ground for testing and training.

In 2003, the U.S. military obtained four of the Ukrainian tanks, which apparently underwent tests at the U.S. Army Aberdeen Test Center in Maryland. Moreover, these latest reports simply confirm that the T-84, an upgraded version of the Soviet-era T-80UD, is (or at least was) at Yuma.

Photos that circulated online last April included what was believed to be the Ukrainian tank with a Drozd Active Protection System (APS) installed. The vehicle was lined up at the YPG's Threat System & Target Simulation Yard near other Soviet and Russian combat vehicles. It is common for Yuma to acquire foreign-made vehicles to train U.S. troops, and it seems likely that the Ukrainian military would have provided a tank for testing/training purposes.

As noted, the T-84’s development grew out of the T-80UD program in the 1980s. After the breakup of the Soviet Union, in the mid-1990s a contract was then signed between Ukraine and Pakistan to develop some 320 T-80UD tanks—however that proved difficult as the Soviet military industry had been disturbed across multiple former Soviet states. As a result, Ukraine developed local capabilities to produce the tank—which was finally revealed to the world in 1995.

The newly designated T-84 featured numerous improvements over the T-80 and even the T-80UD, but due to funding issues, Ukraine never ordered the tanks in large numbers for domestic use and some experts have suggested that initially only six to ten were even delivered. As a result, Ukraine has largely been focused on repairing and upgrading older tanks, notably the T-64—even as the T-84 has been seen as a far more capable platform.

The T-84 features armament that is similar to the T-80UD, notably its 125-millimeter smoothbore main gun, which is fitted with an autoloader. The T-84 MBT can also employ 9K119M Refleks anti-tank guided missiles, which can be launched in the same manner as regular rounds. Secondary armament is reported to include a coaxial 7.62-millimeter machine gun, as well as a roof-mounted 12.7-millimeter heavy machine gun.

The Ukrainian tank is powered by a 6TD-2 turbocharged diesel engine, which provides 1,200 horsepower. It is also a well-armored tank, which features an all-welded turret that is fitted with built-in explosive reactive armor blocks, while the protection of the MBT is further enhanced by a Shtora-1 countermeasures system.

Due to the costs, the tank has only been employed in limited numbers—so the question remains where the United States was able to obtain the T-84 seen at Yuma. However, Ukraine has exported the tank to Thailand—but that hasn't been in large enough numbers to bring the cost down. So perhaps the United States just bought one at full price!