Why America’s Best Fighter Jets are Nothing Without One Thing 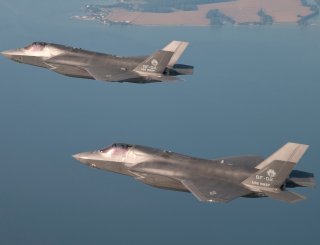 Here's What You Need to Remember: Taking on this challenge, Air Force industry partners are already working on data analysis technologies which move data to the cloud, reducing the hardware footprint otherwise spread across numerous separated terminals and enabling more immediate, broad access to combat-crucial data.

What if Air Force fighters and bombers were successfully attacking an enemy absolute precision and exact targeting data when all of the sudden their GPS signals disappeared or got hacked? What if that threw off the guided missiles and ground-coordinates being assembled on the ground by friendly Joint Tactical Air Controllers?

In a matter of minutes, attacks could be sent off-target, interrupted or simply made no longer accurate. Army-Air Force multi-domain collaboration might collapse. Even further, communications, digital moving maps showing navigational detail and intelligence data sharing are could be disrupted or destroyed by the enemy.

The Global Positioning System is a virtual backbone for military operations which is considered essential to coordinated warfare operations. While there are many ongoing efforts to “harden” or better secure GPS, what if it were hacked? Just how hackable is it?

Well, the U.S. military wants to worry about this less by engineering a multiplicity of emerging technologies intended to preserve what’s called Positioning, Navigation and Timing (PNT) in a GPS-denied environment. This is now increasingly becoming possible, in part due to the Air Force’s emerging Navigational Technology Satellite-3 technology set to launch in 2022.

NTS-3 is an emerging, high-tech space communications system engineered to both provide secure alternatives to GPS and also better secure GPS itself, according to Air Force Research Laboratory developers.

“The concept for NTS3 is to incorporate RF and visual sensors. A ground receiver can pull together all the various signals and make sure that whatever signals are out there are pulled into the architecture,” Colonel Eric Felt, Director, Air Force Research Laboratory Space Vehicles Directorate, Kirtland Air Force Base, told reporters at the 2020 Air Force Association Conference.

“Software defined radio to switch up waveforms and defeat jammers and do it on the fly, phased array antenna that allows you to steer your power enable space-based positioning, navigation and timing,” Felt added.

NTS-3 will operate for one year in an Geosynchronous Earth Orbit, offering the technical means to coordinate and integrate multiple signals into one technical architecture, the paper explains. Prototype demonstrations of NTS-3 will involve a space-based test vehicle, ground-based command and control and agile software defined radios.

As is often the case, the advent of new technologies of this kind greatly impact the tactical approach to warfare, a phenomenon often referred to as Concepts of Operation (CONOPS).

“We are working with space vehicles and our partners to look at agile combat support and build up the infrastructure to explore the CONOPS of how we would use these. We are also doing orbit experimentation to operate through a jamming environment and develop CONOPs into operational environment,” Mr. Chris Ristich, Transformational Capabilities Office Director and Director of Strategic Development Planning & Experimentation, told reporters at an Air Force Research Laboratory media event during the 2020 Air Force Association’s annual Conference, told reporters.

New CONOPs brings several possibilities to mind regarding how NTS-3 might enable new tactics. Ground forces and air platforms will likely need to train on new hardware systems and adjust mission intelligence plans to accommodate newer forms of security and the advantages of additional signal technologies such as software defined radios and antennas. Software defined radio can operate without needing a fixed infrastructure by sending IP packets of voice, data and even video through various high-bandwidth waveforms.

These waveforms can be switched, adjusted, expanded and even encrypted for additional security. Many of them do rely upon line-of-sight connectivity, yet their ranges and levels of security have been massively improving in recent years. Also, each software programmable radio not only transmits but functions as a router “node” as well, enabling continued functionality in the event that some systems are disrupted. This creates a less penetrable “mesh” network. Finally, through continuous upgrades, waveforms can be programmed with new methods and technical procedures to add data, better secure information or encompass larger parts of the spectrum.

Both antennas and software-defined radio can not only use multi-directional signals but also engage in “frequency hopping,” a method of switching frequencies and waveforms in the event that one gets jammed, enabling sustained operations amid enemy attacks.

Alternative signal methods and multiple signal methods generate data which needs to be organized, analyzed, pooled and transmitted, a circumstance which inspires AFRL engineers to work on ground-terminal data integration. Called Enterprise Ground Services, the technologies gather data from otherwise disparate sources of input, pool them, analyze them and then share data securely across the force with pilots, ground warriors and commanders.

What all of this amounts to is simple. The Air Force is massively fast-tracking NTS 3, though an expedited contract with L-3 allowing options for up to nine satellites.

“This contract does allow you to move straight into production,” Felt said.