Why the U.S. Air Force is Thinking About the F-22's Replacement 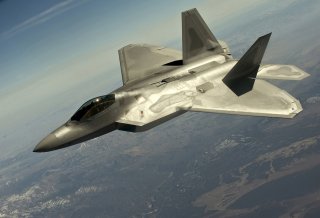 Key Point: A next-generation F-22 would bring a complementary capability to war in a way that might help foster a complete picture or possibility of combined fifth- and sixth-generation aerial dominance.

The Air Force’s now airborne sixth-generation aircraft may indeed incorporate several unprecedented technological breakthroughs in the areas of speed, stealth, maneuverability, weapons and artificial-intelligence-enabled sensing, some of which may surpass the limits of current F-35 performance. While early in development and as of yet unproven, program acceleration, rapid progress and high enthusiasm for the Air Force’s sixth-generation next-generation air dominance platform may all be appropriate.

However, there are several variables often overlooked when it comes to the argument that the anticipated value-added of a sixth-generation aircraft suggests or even justifies a massive reduction in planned F-35 jets. Should F-35 jets be reduced as part of the accelerated effort to fast-track large numbers of sixth-generation aircraft to war? No. They are intended to complement one another and may indeed be distinct aircraft with slightly different mission sets and technical characteristics.

While very little is known about the configuration, performance parameters or mission profile for the new sixth-generation aircraft, there has all along been evidence that plans for the jet more fully aligned with thinking of it as an F-22 replacement and not an F-35 substitute. This seems even more apparent now, in light of the recent revelation that the F-22 Raptor will actually begin to sunset in 2030, several decades ahead of earlier projections as the Raptor has gone through numerous upgrades. Could an expedited exit for the F-22 jet be due in large measure to the accelerated arrival of next-generation air dominance sixth-generation? Frankly, it would seem that way.

As part of this discussion, it seems significant to note that, while they are both fifth-generation aircraft, the F-35 and F-22 are different airplanes. Therefore, engineering a next-generation F-22-like sixth-generation aircraft in no way diminishes the need for F-35 jets. One could actually argue the contrary. An F-35 jet is a multirole fighter with unparalleled Intelligence, Surveillance and Reconnaissance sensor technologies, AI-capable computing and a perpetual ability to adapt, change and enhance performance through software upgrades and new mission systems or targeting innovations. The Pentagon has a long-term continuous modernization development program for its F-35 jet and plans to fly it into the 2070s and beyond. The F-35 is a multirole fighter, and while it is capable of dogfighting and aerial maneuvers, its principle margin of superiority may reside in its sensing, computer processing and long-range-high-fidelity targeting technology.

A next-generation F-22, however, would bring a complementary yet slightly different capability to war in a way that might help foster a complete picture or possibility of combined fifth- and sixth-generation aerial dominance. The F-22 jet is regarded as, quite possibly, the fastest, most maneuverable and best air-to-air combat platform in the world. While capable of sensing, close air support and communications networking, the F-22 jet is widely regarded as an air-supremacy platform. Therefore, the picture is becoming clearer. A next-generation of sixth-generation F-22 jet-like capability could indeed be paradigm-changing, and yet still be something that massively benefits from having a complimentary presence of multirole F-35 jets.