Will Russia Field Large Numbers of Both the Su-57 and Su-75? 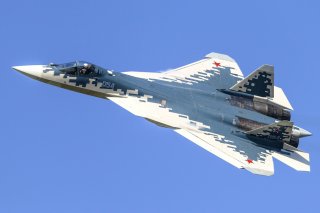 Key Point: Russia originally planned to acquire just a few hundred Su-57s, and the new Su-75 could change that plan if it can fill a similar role to the air superiority fighter.

With the arrival of Russia’s new F-35-like Checkmate stealth fighter jet, or what some are calling the Su-75, some might wonder about the fate of the Su-57. Wasn’t that supposed to be Russia’s signature 5th-generation fighter? After all, it was in development for many years and proposed as a potential F-35 rival.

However, now the Checkmate looks much more like an F-35 rival, and that may in fact be exactly what it is intended to be. Apart from a very similar external configuration, there is really no way to know just how much the new Russian jet might actually challenge an F-35.

One interesting factor to at least consider relates to a simple numbers game. Russian plans for Su-57s at the moment call for a small fleet of just a few hundred of the aircraft. While that could certainly change, the U.S. Air Force plans more than 1,700 F-35, giving the United States a substantial fleet-size advantage when it comes to 5th-generation aircraft. Also, this disparity also pertains to fighter jet fleet size overall between the United States and Russia, as the United States operates nearly three times as many fighters compared to Russia.

If Russian plans for the Su-57 don’t change in terms of numbers, then an interesting question emerges. Does Russia plan to produce huge numbers of “Checkmates?”  It may be that Russia has long planned to mass-produce an F-35-like copycat 5th-generation plane, as very little or next to nothing was known publicly about “Checkmate” until recently.

Perhaps the Su-57 could function alongside and support the new Checkmate, but that would depend upon the efficacy, security and scope of Russian networking. Ultimately, that would likely be the margin of difference between Russia and the United States, apart from sheer numbers or fleet size. The quality of threat data sharing, and of course weapons range, is likely to determine which air force might prevail in a war against the other. For instance, depending upon how fast they build Checkmates or more Su-57s, Russia would be greatly outnumbered in any kind of major air engagement with the United States. However, should Russian Su-57s and Checkmates for some reason operate with much longer-range and precise weapons and sensors, and most of all have a secure ability to transmit target information and intelligence in real-time, then it might seem conceivable that Russia could perform quite well against a larger U.S. air attack.

That is quite an assumption, however, because although very little is known about the actual maturity of Russian fighter jet computing and sensing, it might strike many as unlikely that it would exceed or pass the performance ability of an F-35 in some kind of measurable way. However, just as the F-35 combat strategy, and success thus far in war games, rests to a large extent upon its ability to see and destroy targets before it is seen itself, it would not be surprising if such a technical approach were also a large part of Russian thinking as well when it came to engineering Checkmate.

This article previously appeared in July 2021 and is being republished due to reader interest.