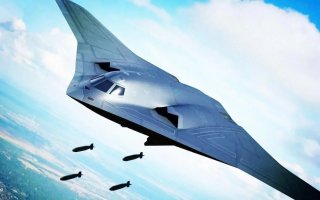 Here's What You Need to Know: There is no concrete delivery timeline for the H-20, though an increasing number of reports allege that the H-20 will enter serial production in the mid-2020s.

China’s aircraft industry is forging ahead with the Xian H-20, an advanced strategic bomber that may threaten America’s ability to project power in the Asia-Pacific region.

Reports emerged as early as 2015 that the Chinese People’s Liberation Army Air Force (PLAAF) is developing a successor to the H-6, a license-produced variant of the Soviet Tu-16 heavy bomber from the 1950s.

The goal, according to Chinese military analysts, is not just to build a better H-6 replacement, but to expand Chinese power projection beyond what Chinese military doctrine calls the “second chain”—namely, the space stretching from Japan to Micronesia. The PLAAF wants a strategic bomber that can operate within the third chain, also known as the area that begins with the Aleutian Islands and extends beyond Hawaii.

There are no verified photos or footage of any possible H-20 prototypes, but everything that is publicly known about the aircraft suggests a flying wing airframe design that’s broadly reminiscent of other next-generation bombers including the B-21 Raider and Russia’s PAK DA.

The H-20 is widely expected to boast a range of at least 8,500 kilometers, and quite possibly more; for a frame of reference, the PAK DA has a speculated range of around 12,000 kilometers. The H-20 will almost certainly travel at subsonic speeds, prioritizing stealth and deep penetration capabilities over raw aerodynamic performance. In keeping with emerging PLAAF doctrine, the H-20 will likely feature a formidable electronic countermeasures (ECM) package, as well as an expansive suite of sensors to process and share battlefield information with nearby friendly units. The H-20 will feature a payload of at least 10 tons, though additional details have yet to emerge on its precise weapons loadout.

No verified information has surfaced concerning the H-20’s engine, but some reports allege that the bomber uses a modified version of the WS-10 turbofan engine. As with China’s new J-20 fifth-generation fighter, it is fully possible that H-20 prototypes or even initial serial batches may ship with older, but reliable engines as a stopgap measure until a new, more advanced engine is fully certified and mass-produced.

In 2018, Chinese defense outlet China Defense Online posted a video celebrating the anniversary of the Xi'an Aircraft Industrial Corporation. The video, consisting in large part of rendered graphics, described the history of Chinese military aviation before ending with a brief teaser of a draped flying wing fighter that could represent the H-20. The scene was shot in what is clearly a reference to Northrop Grumman’s prolific 2015 Super Bowl ad for the B-21 Raider.

There is no concrete delivery timeline for the H-20, though an increasing number of reports allege that the H-20 will enter serial production in the mid-2020s. China is continuing to upgrade and serially produce the H-6, suggesting that the PLAAF does not expect to receive large numbers of serial H-20 units any time soon. Still, the South China Morning Post has suggested that an H-20 demonstrator model could make its debut as early as 2020, at this year’s Zhuhai Airshow. Briefly canceled in the summer over coronavirus concerns, it now appears that the 2020 Zhuhai Airshow will proceed on its originally scheduled date: Nov. 10-15.