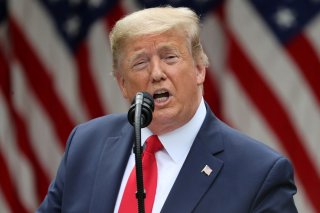 President Donald Trump has signed into law economic sanctions on Chinese officials for violating the autonomy of Hong Kong.

U.S. law dating back to 2019 already mandates some sanctions on officials responsible for violating human rights in Hong Kong. The Hong Kong Autonomy Act, signed on Tuesday, will extend these sanctions to banks that do business with rights-violating officials.

The new sanctions come as the Hong Kong opposition faces off against Beijing over the Chinese central government’s new national security law.

“This law gives my administration powerful new tools to hold responsible the individuals and the entities responsible for extinguishing Hong Kong’s freedom,” said President Donald Trump in a ceremony late on Tuesday afternoon.

“We’ve all watched what happened. Not a good situation,” he added. “Their freedom’s been taken away, their rights have been taken away, and with it goes Hong Kong in my opinion, because it will no longer be able to compete with free markets.”

China had promised Hong Kong the ability to maintain its own system of government after taking the city back from Britain in 1997. But a year of protests against Chinese rule has prompted the central government to impose a national security law with harsh restrictions on political activism in Hong Kong.

The Chinese central government recently tried to use the law to ban primary elections held by the Hong Kong opposition parties, setting up for a showdown between authorities and hundreds of thousands of Hong Kong voters.

“This overt act of authoritarianism requires a decisive American response,” said Hong Kong Autonomy Act cosponsor Senator Pat Toomey (R-Pennsylvania) in a statement. “The fight is not over until the Chinese government backtracks and honors its commitments” to Hong Kong.

Fellow cosponsor Senator Chris Van Hollen (D-Maryland) added that sanctions were “only way to ensure that those involved in the crackdown on Hong Kong will feel the full consequences of their actions.”

“The Chinese government’s aggression merits this swift rebuke,” he said.

Trump pulled the trigger, signing an executive order to treat Hong Kong the same as mainland China along with the Hong Kong Autonomy Act on Tuesday.

The struggle over Hong Kong comes amidst a sharp downturn in U.S.-Chinese relations.

U.S. lawmakers have also proposed imposing sanctions on Chinese officials over human rights abuses in Xinjiang and Tibet, where China is accused of trying to wipe out its Uyghur, Turkic Muslim, and Tibetan Buddhist minorities.

For Toomey, the Hong Kong sanctions were a start.

“These new, mandatory, and punishing sanctions on those who undermine Hong Kong’s autonomy shows the communists in Beijing, and the world, that America stands with Hong Kong,” he said.