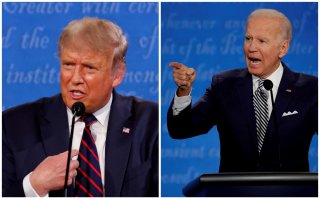 Americans are a little more than three weeks from voting for the next president of the United States. Millions of Americans have already voted. According to the polls, Democratic presidential nominee Joe Biden is sitting pretty on a double-digit lead over Donald Trump, who until recently was in isolation at the Walter Reed medical complex for a positive coronavirus diagnosis. Trump’s inability or unwillingness to admit that the virus is deadly serious combined with his on-again, off-again negotiations on a new stimulus bill, is making it difficult for even the most loyal Republican to envision the party extending its term in the White House for another four years.

While elections can tame the most self-confident pollster and election handicapper (see: 2016), it’s becoming increasingly likely that Biden will be the forty-sixth president. All of which is to say that a potential Biden administration will be confronted with a smorgasbord of problems—above all a coronavirus pandemic that continues to infect fifty-six thousand Americans a day.

Many issues will need to be tackled immediately—either because there are deadlines attached to them or because kicking them down the road will only increase the urgency.

The February 2021 agreement signed between the United States and the Taliban commits Washington to a fourteen-month withdrawal, which means that all U.S. troops should be out of Afghanistan by April 2021 pending the Taliban meets specific conditions (severing ties to Al Qaeda and preventing Afghanistan from again becoming a base for foreign terrorist organizations). Trump has suggested he may seek to accelerate that timetable, tweeting on October 7 that all U.S. servicemembers should be back home “by Christmas.” Trump’s unofficial declaration caused more confusion in the national security bureaucracy, which has yet to receive any presidential orders to speed up the withdrawal.

Assuming Biden wins in November, he will very likely enter the White House with several thousand U.S. troops still stationed in Afghanistan. On the campaign trail, the former vice president has tried to have it both ways on the war—reminding Americans he was strongly opposed to the 2009 troop surge but hinting all the same that he would maintain a residual counterterrorism presence in the country. Biden will thus face a critical question in the opening months of his tenure: will he abide by the troop drawdown timelines spelled out in the U.S.-Taliban deal, or will he launch an internal Afghanistan policy review to determine whether the withdrawals should continue on schedule? The answer could determine whether his “end forever wars” mantra on the campaign trail was a genuine goal or merely a political talking point.

Getting Iran Back to the Table

The Trump administration’s maximum pressure policy on Iran has depleted Tehran’s foreign reserves, hindered its oil exports, and plunged the Iranian economy into a dark hole. The International Monetary Fund forecasts a 6 percent decline in Iran’s economy by the end of the year. That figure will likely go up now that the U.S. Treasury Department has blacklisted Iran’s entire financial sector, a designation that exposes foreign entities anywhere in the world to U.S. sanctions if they try to do business with the Iranian banking system.

The policy deliverables of maximum pressure, however, have been abysmal. The Iranian government is not responding to the economic assault the way advocates of the strategy expected. There aren’t nationwide demonstrations in the streets calling for the downfall of the Islamic Republic. Iranian officials aren’t caving to U.S. demands, nor do they appear to have much interest in coming back to the table to negotiate. Iran’s stockpile of enriched uranium is ten times larger today than when Washington was still a participant in the JCPOA. Iranian-backed Shia militias in Iraq are so active that Secretary of State Mike Pompeo told Iraqi prime minister Mustafa al-Kadhimi that U.S. diplomats may pack up and leave if Baghdad doesn’t begin taking action against them.

Biden has rightly called Trump’s Iran policy a disaster. What he hasn’t done with much specificity is explain what he would do differently other than “offer Tehran a credible path back to diplomacy," reenter the Iran nuclear deal and use it as a foundation for additional negotiations. This is certainly a logical start and one many (including this author) support. But what incentives would Biden give Iran to sweeten the pot? How would the Biden administration respond if Tehran continued to demand compensation for lost revenue over the last three years? Would Biden and his national security team start small by building up a quantity of trust or would it try to sign a comprehensive grand deal on the very issues that have soured U.S.-Iran relations for the last forty-one years? None of these questions are easy to decipher, but all of them will need to be answered in one form or another.

Whether the Trump administration will agree to extend the New START accord with Moscow is still very much an open subject. Trump administration officials have been more optimistic this month that some sort of arrangement can be struck with the Russians before the U.S. election. One official told the Associated Press on Oct. 9 that U.S. and Russian negotiators have agreed in principle to a nuclear weapons freeze, perhaps on the road to an extension of New START.

Yet Moscow’s tone has been dreary. Russian foreign minister Sergey Lavrov told Russian news agencies this month that the chances of preserving the New START accord are not particularly high. It goes without saying that if New START expires in February 2021, Washington and Moscow will enter a period with no arms control accord between them—a situation neither has experienced since the early 1970s. With no guardrails to check a twenty-first-century arms race from developing, the probability of the world’s two largest nuclear weapons powers building bigger and better warheads and launch platforms goes up.

Biden recognizes the potential dangers of a new arms race. He is on record supporting a five-year extension. Assuming U.S.-Russia arms talks don’t result in anything concrete between now and January 21, 2021, Biden will only have a few weeks to keep New START alive.

A hypothetical Biden administration won’t have much time to celebrate. On some issues, there is literally no time to waste.