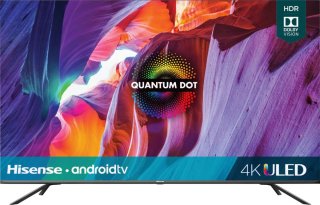 For the past several years, the Chinese tech company Hisense, along with TCL, has become a go-to HDTV brand for budget-conscious consumers.

As many American consumers have already attested, you will rarely overpay for Hisense’s offerings, but you’ll always land a decent set that the whole family can enjoy from gaming to movie nights.

The H8G Quantum Series is no different. Currently retailing at Best Buy for $500 for the 55-inch model, $700 for the 65-incher, and $1,250 for the 75-incher, these are really rock-solid price points for a panel of this quality—although the nearly doubling of the price from the 65-incher to 75 is a bit overdone.

If you do decide to go with the 65-inch model, you’ll be receiving quite a bundle for a reasonable price tag of $700. Like the more well-known QLEDs from the Korean tech giant Samsung, the H8G also taps into next-generation quantum-dot technology in their panel displays, boosting the overall color reproduction that you can actually see for yourself.

Also know that the set features Dolby Atmos, Dolby Vision HDR, a built-in Google Assistant, and Android TV. In the 2020 refresh, the H8G now comes with local dimming zones that do a wonderful job in keeping the screen pitch black in areas that need to be and has a peak brightness of 700 nits.

This set really does provide deep, uniform blacks, but know that it does perform better in dark or dimly lit rooms. If you’re more of a daytime TV-viewer or if the room is naturally brighter, be aware that the H8G might have a tougher time getting rid of those annoying glares and reflections.

In most cases, gaming should be top-notch—just not on the level of the much-vaunted OLED panels. If you happen to be waiting to get your hands on the next-generation gaming consoles from PlayStation or Xbox, know that the H8G has the ability to provide a solid gameplay experience.

Like Roku TV and Amazon Fire TV, the set’s Android TV smart platform will give you a VIP experience when searching for on-demand content and streaming apps, which include Netflix, YouTube, HBO Max, and Disney+. The interface is user-friendly and fluid, and the choices offered are seemingly endless. Not to be outdone, there is a healthy selection of games that you can download and play by using your remote or Android TV Gamepad.

Hisense also seems to have put in the necessary work to upgrade its clunkier designs of previous years. This particular model boasts an elegant, near-bezel-less display that could give Samsung’s QLEDs a run for their money.

Know that the H8G provides plenty of ports for your external entertainment hardware. They include four HDMI inputs, one with audio return channel (ARC) support, two USB ports, an Ethernet port, and one optical port.