LG's CX 65-inch OLED HDTV: The Reviews are In (And Look Good) 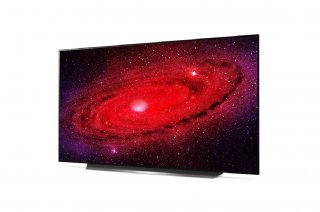 LG's 2020 OLED models were introduced at CES in January, and pricing and availability were launched in March, with the 12 models shipping between April and June. That lineup even included some 8K models.

The company's 48-inch OLED TV in the CX series has gotten a great deal of attention of late as one of the smallest TVs on the market, and that model is set to ship early next month.

This week, reviews have appeared of the 65-inch CX model, the OLED65CXPUA, and they're very positive. That TV is available now, and has a listed price of $2,800.

Tom's Guide praised the TV's picture, smart TV picture, "top notch sound capabilities" and its thin design. Its one listed drawback was the "relatively high price," compared to similarly sized TVs from Vizio and other manufacturers.

"If you are looking for the best 4K picture available, the LG CX OLED will not disappoint. The addition of improved sound and some of the best smart TV features including voice control just make this package all the more appealing," the review concluded.

T3, in their review, gave the OLED65CXPUA five stars out of five, and called it "the best OLED TV for most people."

The review listed "gorgeous picture quality, "breath-taking design" and  "Affordable by OLED standards" as "reasons to buy," while listing drawbacks as its lack of HDR10+, potential for image retention, and "really struggles with bass."

"The various picture quality refinements LG has introduced in the CX range may not be huge by themselves," the review said. "But put together they add up to a picture that makes more consistent and dramatic use of OLED’s strengths than last year’s already fantastic LG OLED TVs did. And the results really are glorious."

RTINGS on May 20 published a review of the 55-inch CX model, but stated that the settings used would also be valid for the 48-, 65- and 77-inch versions.

"The LG CX OLED is an amazing TV for most uses," the review said. "Like any OLED TV, it's able to produce perfect blacks and has a near-instant response time. It has wide viewing angles, excellent reflection handling, great out-of-the-box color accuracy, and low input lag." The review did note that there was risk of permanent burn-in.

On the RTINGS overall rankings of TVs, the LG CX OLED TV ranks third in terms of mixed-usage score, behind two other LG lines, the E9 and C9.