The Matrix and More: 5 Best Sci-Fi Films on Netflix in June 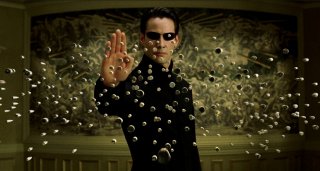 It’s indeed a hectic world out there right now, and if you need a two-hour break from all that, there is nothing better than a riveting sci-fi movie.

Fortunately, Netflix can help with that. The streaming platform does boast a mammoth repository of movies from all decades, so it can be quite difficult at times to settle on what to watch.

Well, to help you expedite the film-selection process for family movie night, here are five awesome sci-fi flicks to consider.

Leading off is Christopher Nolan’s “Inception.” You would think that the highly respected director would have a natural drop-off from the incredibly successful “The Dark Knight,” but obviously that wasn’t the case with “Inception”—he somehow still raised his A-game. Featuring a star-studded cast led by Leonardo DiCaprio, this film will surely stun you visually and have you guessing till the very end.

Next up is “The Matrix,” a film that captivated audiences when it first hit movie theaters in 1999 and has since become a sci-fi classic. Starring Keanu Reeves, whose career renaissance has been in a new gear thanks to the highly popular “John Wick” films, “The Matrix” delves into a world that is a digitized illusion where protagonists must battle deadly machines to save humanity.

It may not ooze the same excitement as “Stranger Things,” but Netflix now finally has the complete “Back to the Future” trilogy available to stream. The original is still considered one of the best sci-fi movies ever made—and boasts a fantastic soundtrack to boot. You really can’t go wrong with everybody’s favorite Michael J. Fox as the hero Marty McFly, and don’t forget about the always-eccentric Doc Brown and that modified DeLorean car.

No. 4 on the list is “Ex Machina,” a film that is both cerebral and unsettling. Starring Alicia Vikander as the robotic woman named Ava and Oscar Isaac as the billionaire inventor, Domhnall Gleeson’s character is chosen to be the human component in a Turing test to analyze the capabilities and consciousness of Ava. However, the male characters soon realize how dangerous and deceptive Ava can be.

Finally, be sure to check out “Snowpiercer,” which is directed by this year’s big Oscar-winner Bong Joon-ho. Like “Parasite,” this film also includes sharp criticisms on class and wealth, all within a comic-book-like post-apocalyptic world. The characters, both rich and poor, are survivors of Earth’s second Ice Age, and they will apparently live out their days on a luxury train that travels around the globe. Eventually, a new class system arises.