Meet the Samsung Galaxy A71 5G: The Cheapest 5G Phone Available in America 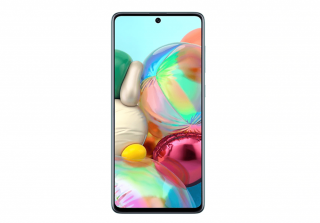 This Friday, Samsung will debut its A Series in the U.S., with Galaxy A71 5G, which will immediately become the least expensive 5G smartphone available in the U.S.

Per announcements by Samsung and T-Mobile, the A71 will be available at a price of $599.99 before carrier subsidies, which is $100 less than the OnePlus 8. (That phone, at least, along with other recent OnePlus models, offers access to the popular Fortnite video game.)

The Galaxy A71 will be available from Sprint, T-Mobile and Metro, with an unlocked version arriving later, that will work on other networks, including AT&T and Verizon Wireless.

“Galaxy A71 5G makes it easier to check in with friends and family, capture great photos and relax with your favorite entertainment,” Samsung said in the announcement. “And it makes blazing-fast, next-generation connectivity more accessible—and revolutionizes the way we share, create and unwind.”

Samsung had announced a refresh of the Galaxy A midrange series earlier this spring.

Later in the summer, the T-Mobile networks will offer several other 5G Galaxy phones, including A01—which will arrive June 22—followed by the A21, A11 and A51.

T-Mobile does offer a disclaimer in its press release: “5G is still developing. Not all devices & signals are compatible; check device specs. Coverage not available in some areas. Downlink only. Some uses may require certain plan or feature.”

Samsung continues to hold the global market share lead in smartphone sales, as of the end of the first quarter, as overall sales deeply declined in the quarter due to coronavirus. Samsung was followed by Huawei with 18 percent and Apple with 14 percent.

As for specific sales of 5G models, Samsung also maintains the lead, with just over a third of the global market of 24.1 million shipments. The 5G market is expected to grow significantly this year, with Apple likely to debut its first 5G smartphone by the end of 2020.