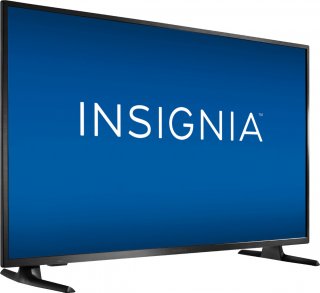 Right off the bat, you should know that Best Buy’s Insignia brand often uses parts from past-year versions of LG, Toshiba and Samsung TVs, so sometimes you don’t know exactly what you’re getting.

But fret not—overall, these are solid sets that really have budget-conscious consumers in mind. The same can be said for Insignia’s 50-inch 4K Fire TV, which can be yours right now for a reasonable sum of $350.

The pricing alone should have you jumping for joy, but this HDTV has proven that it also has meat on its bones.

When compared to the much-vaunted OLED or QLED panels, the picture quality of the Fire TV is obviously lacking and won’t necessarily blow you away. Even when put up against lower-tier TCL, Hisense or Vizio panels, it can, at times, struggle to keep up.

Along with a decent 4K display, it boasts HDR capability, the screen action is fairly smooth and the color gamut is on full display. Keep in mind that there is no local dimming, which limits how well the panel renders detail in dark scenes, and its wide-angle viewing will probably disappoint.

However, for most folks out there, the Fire TV is more than passable for everyday TV-watching and family movie nights—and don’t forget about all the money you saved with this purchase by not going all in on an OLED or a QLED panel.

What really separates the Fire TV from the competition is the clever tie-up it forged with e-commerce giant Amazon. If you’re already a big fan of Amazon Alexa, there’s no reason why you wouldn’t enjoy this set.

There is a mic built into the remote control, and with Alexa handling all communication between you and the TV, it’s like having an Echo or an Echo Dot without actually paying for one. It can also control smart-home devices, get sports scores and weather reports and answer all kinds of questions.

Keep in mind that it is fully capable of giving you access to all of your favorite apps like Netflix, Hulu and Disney+, as well as obviously Amazon Prime Video. Similar to Roku TV, Amazon’s streaming content choices are seemingly endless. But know that TCL’s cheaper Roku TVs lack the handy microphone and voice buttons found on the Amazon Fire TV remote.

What this particular Fire TV won’t be is a hub for your music. As a $350 budget TV, the speakers are understandably lackluster, though they could possibly work in smaller bedrooms. If you’re seeking a more immersive cinema-like experience, it’s best to shop around for a decent soundbar.

Ethen Kim Lieser is a Minneapolis-based Science and Tech Editor.