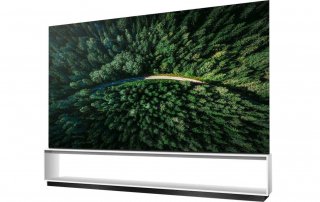 If you’re going to shell out $30K, you should expect nothing short of perfection—meaning unrivaled picture quality, accurate colors, the deepest blacks and inimitable uniformity and contrast ratios.

Yes, you will achieve all that and more with the 88-inch LG Signature Z9 8K OLED TV. However, that extravagant price—that really is hard to swallow. For the average folks out there, there’s just no way to justify spending that much, but if you can swing it, more power to you.

As you would expect, this LG behemoth comes fully loaded with all the cutting-edge features found on other LG OLED offerings, including state-of-the-art processing, webOS smart platform, a handful of AI assistants, HDMI 2.1 connections and Dolby Atmos. This latest version of HDMI supports higher frame rates up to 120Hz, dynamic metadata for HDR and eARC.

Aside from its gorgeous, bezel-less design, the OLED panel on the LG Z9 is indeed amazing. It employs a 10-bit display that boasts more than 33 million self-emissive pixels. In order to accommodate this higher resolution, the Z9 taps into the power of an updated version of LG’s second-generation Alpha9 intelligent processor that takes advantage of deep learning algorithms. When it comes to 4K HDR content, the LG Z9 excels in every way.

And as an 8K set, you’re basically future-proofing this investment because more than likely, the majority of content will one day shift to 8K. You just won’t be enjoying any awesome content in that resolution right now because there are few options currently available.

The one huge risk that you take on by purchasing the Z9 is the pesky issue of burn-in, which occurs whenever a persistent part of the image of a screen, such as a channel logo or a scoreboard from a sports game, remains as a ghostly background no matter what else is being shown on the screen. These static image elements have “worn out” certain areas of an OLED screen’s organic materials faster than the rest of the screen.

Since your wallet is already $30K lighter because of this purchase, being unhappy would surely be an understatement if you ever got stung by one of these permanent blemishes. Since burn-in isn’t usually covered under warranty, you’ll basically have to live with this imperfection for as long as you own the TV (though you could spend thousands more to fix it).

If you’re not fully convinced to splurge on the Z9, know that there are other solid OLED options out there, such as LG’s B9 Series. This HDTV has garnered plenty of rave reviews and can be had for only $1,300. The B9 matches up very well to its more expensive brethren, the C9 Series (you can upgrade to this model for an extra $200), and aside from having minor design tweaks and slightly less processing speeds, the overall picture quality has been shown to be nearly identical.