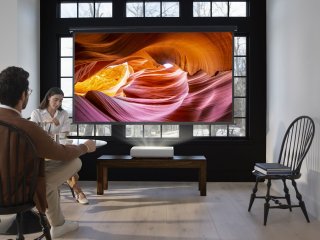 Samsung this week announced a new ultra-short throw, 4K laser projector called The Premiere, which is being marketed by Samsung as the key product in its “Life Unstoppable” line, which is being unveiled at the partially-live and partially-virtual IFA tech show in Berlin.

The Premiere is available in 120- and 130-inch models, the latter of which, the LSP9T, is described by Samsung as “the world’s first HDR10+ certified projector with triple laser technology.” The product includes Samsung’s smart TV platform, and also offers the Ultra HD Alliance-approved Filmmaker Mode—the mode that ensures films are shown on television as their filmmakers intended—in a first for a projector. And it works either on a screen, or a wall.

“Over the past few months, we have seen how consumers are spending more time at home and how the role of everyday life continues to change. TV has become the center of entertainment, a fitness partner, a co-worker and a source for news,” Jongsuk Chu, Executive Vice President of Visual Display Business at Samsung Electronics, said as part of the announcement.

“The Premiere re-imagines the home cinema experience with an all-new, compact design, 4K picture quality and big sound for tight spaces that can be used for any at-home activity and living room arrangements.”

The Premiere is part of the Samsung Lifestyle line, which also includes such products introduced earlier this year as the Terrace outdoor TV, the Serif, the Frame and the Sero, which is Samsung’s TV that rotates into portrait mode.

While the IFA event is focused on the European market, The Premiere will be rolled out globally later this year, the company said.

The Life Unstoppable event also featured such products as the Odyssey G5 gaming monitor, the Galaxy Z Fold 2 smartphone that was introduced earlier this week, the Tab A7, and a new Wireless Charging Trio. Samsung also showed appliances, including the RB7300T Classic Refrigerator, and the WW9800T Washing Machine and DV8000T Tumble Dryer.

“This year has seen us completely re-evaluate our relationship with technology, in a way that no-one could have expected,” Benjamin Braun, Chief Marketing Officer, Samsung Europe, said in the announcement.

“At Samsung, we not only embrace these changes, but aim to stay one step ahead—already innovating with the future in mind. We are relentless in our mission to create bold, revolutionary technology and what better way to announce our 2020 line-up than with this game-changing virtual experience. Today was just a taste of what is to come from Samsung as we continue to bring you products that fuel a Life Unstoppable.”