Tesla’s Electric Vehicle Competition Not Yet a "Measurable Threat" 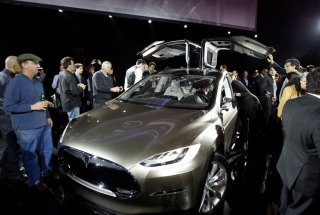 With a market cap now valued at about $180 billion, the next-gen electric carmaker, which only became profitable this year, is now worth more than Toyota, Honda, Volkswagen Group and Daimler.

Tesla’s chief rivals, however, have not given up hope in becoming relevant players in this high-speed race, according to one notable analyst.

“For the company’s valuation to advance higher it will need to hold off other automakers as they roll out new EVs over the next five years,” Loup Ventures managing partner Gene Munster said in a recent note.

Munster expects the company’s domestic share to sink below 25% over the next decade, but in the near-term, it should be able to fend off strong competition from other carmakers.

“Based on the currently available EV models in the U.S. market, along with the models expected to be released next year, we believe Tesla will exit 2021 with a 70-80% market share,” he wrote.

“If we’re correct, Tesla’s economies of scale will strengthen, making it more difficult for traditional automakers to benefit from the long-term secular shift to electric.”

Competitors in this space have a difficult time competing with Tesla—especially its Model 3. The note suggests that the U.S. electric car market could have more than 20 vehicles by the end of 2020, but most aren’t considered to be “mainstream options.”

“The majority of these new models suffer from one of two critical flaws: starting prices above $70,000 and/or ranges below 225 miles,” Munster wrote. “These two flaws rule out most EVs as mainstream options.”

For Munster, only five vehicles currently fit into the “mainstream” profile, with Tesla’s Model 3 in the best position.

“Bottom line: competition in 2020 (and likely in 2021) is not a measurable threat to Tesla,” Munster wrote.

“The Model 3 is still unchallenged in its EV value proposition and we expect the availability this year of the short-range, $40K Model Y to help further sustain Tesla’s market position.”

The Model Y, a mid-size SUV with seating for up to seven people, was first unveiled in early 2019, and production began at the company’s Fremont plant in California earlier this year. The first deliveries took place in March.