Verizon off to an Early Lead in 5G Phone Sales 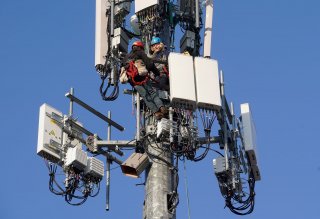 The 5G market in the United States is still in its early phases, but a new report says that when it comes to selling phones with that capability, one carrier is off to a significant lead.

According to new numbers this week from M Science, as cited by Light Reading, of the 4.1 million 5G phones sold as of mid-July, Verizon had sold 2.2 million, or 5.4 percent. AT&T was second with 629,000, T-Mobile was third with 501,000 and Sprint fourth with 483,000. With T-Mobile having purchased Sprint in a deal that closed in the spring, the two carriers together would combine for second place.

Light Reading attributed Verizon’s success to having begun selling 5G phones earlier than its competitors, while also having the most customers.

Throughout 2020, most major smartphone manufacturers have been releasing 5G models, including LG’s Velvet in July, and multiple devices from OnePlus.

The 5G market is expected to get a massive boost later this year, when Apple is expected to unveil its first 5G iPhones. The latest analyst reports state that all four of Apple’s new iPhones this year will offer 5G capability.

There are two different types of 5G, sub-6GHz (sometimes called “sub-6”) and millimeter-wave (“mmWave”). AT&T and T-Mobile’s 5G networks are based on the sub-6 standard, while Verizon’s is mostly mmWave-based. Reports from the supply chain have differed on which iPhones from this year’s line will offer which versions of 5G, or possibly both.

The rise of 5G has also given rise to a series of baseless conspiracy theories, including that 5G is responsible for the spread of coronavirus. There have even been reports, both in Europe and in Canada, of conspirators actually vandalizing or destroying cell towers and other 5G infrastructure. There have not, however, been any reports of such vandalism taking place in the United States.