Afghan Human Rights Protests are Political Resistance Against the Taliban 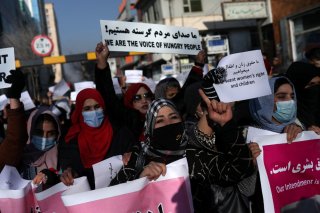 On September 10, 2021, twenty-five days after the Taliban takeover of Kabul, a young lady, infuriated with the silence against the oppression of the Taliban, screamed of the Taliban’s cruelty in the center of Parwan, north of Kabul. Nearly three months later, on November 30, 2021, Rashmin Joyenda stood on a street in front of one of the schools in Kabul and protested the ban on girls’ education. She stated that Afghan women had made hard-won gains in the last twenty years by convening everyone from home to society. But now, the Taliban has made it clear that it will never accept women’s rights. Almost a month later, on December 28, 2021, a courageous lady leading protests in Panjshir expressed what many are feeling: they do not want to be ruled by the Taliban. “We [Tajiks] can rule ourselves,” she said. “They [Taliban] shall go back to their provinces.”

These are just some of many signs of public frustration with the Taliban’s failure to govern. However, for the anti-Taliban constituency, these outcries are the manifestation of collective consciousness; A political will to stand against fundamentalism, ethno-chauvinism, and repression. A claim for self-rule and freedom from the Taliban.

In the last four months that the Taliban has controlled Afghanistan, the group has asserted and implemented a series of creeping and extreme fundamentalist decrees and injunctions cropping the basic liberties and basic rights of citizens. The Taliban’s modification of public policies within a moral framework defined by the Deobandi notion of Islam and Afghaniate (Afghan ethnonationalism) has constrained the free will and choices of people socially, politically, and culturally. Restrictions started with the ban on girls’ secondary schools but swiftly expanded to other dimensions of political and social life. These included a restriction on music, shaving beards, the movement of women, and deprivation of the right to work for women in many public offices.

While Afghanistan is on the brink of the worst humanitarian catastrophe in the world, these policies have exacerbated the economic and social crisis. Many Afghans lost their jobs, and with the collapse of the state and rule of law, the market has also failed. Conservative policies banning many socio-cultural practices and norms have discouraged investments and the restrictions on the movement of women have curbed women businesses. Worse, the Taliban’s actions are not intended to address the country’s humanitarian crisis. Instead, they are envisioned to socially engineer Afghanistan under the guise of Sharia and so-called Afghan culture and customs, replicating the cultural relativist paradigm enforced in many authoritarian states.

The Protests and their Character

A steady, sporadic, and spontaneous but visionary series of civil protests have sprung in Afghanistan over human rights. Organized and led mainly by women, these protests have slowly and deliberately challenged the Taliban’s rule and policy. The protests manifest a political contention over the definition and boundaries of the rights—such as the right to education, right to work, equality, freedom, and women rights—the structure of power, and the order of many things.

To begin with, the movement is sporadic because a mass gathering is impossible under the Taliban’s repressive rule. Many who came out did so at the risk of their lives. For instance, on November 5, the bodies of four activist women who had been missing since October 20, including Frozan Safi, a university lecturer and civil activist, were found in Balkh, northern Afghanistan. Based on the author’s conversations with the protesters, they were part of the larger group of over forty protesters in Balkh who were arrested, tortured, and imprisoned by the Taliban after the protests in early September. They were the first victims of Taliban violence after its take over. To mitigate this risk, multiple low-scale protests have taken place in different neighborhoods of Kabul and other cities. When the Taliban suppress the protests or forbid gatherings, the protesters gather in safe spaces under covered roofs and at home.

Moreover, the protests’ spontaneity is marked by grassroots activism; they are led by common people whose lives have deeply been affected by the Taliban’s draconian policies. The protesters are students, civil servants, librarians, media activists, poets, and homemakers. Many of the activists are even walking long distances to the center of Kabul to join the protests, as they do not have a single penny to pay for transportations. That ordinary people are rewriting this chapter of resistance in Afghanistan through civil protest demonstrates how they are an important part of Afghanistan’s social transformation.

There is no external stimulus for the movement so far. On the contrary, people are standing for human rights while the country has been abandoned by the international community, which has turned a blind eye to the Taliban’s atrocities. And while the protest builds on the global discourse of human rights, to a large extent it has remained indigenous. Much as it has for the past twenty years, the recognition of human rights in Afghanistan was the outcome of women’s struggle both at home and in society. They fought against every kind of inequality on their own.

In the last twenty years, the donor community had generated a group of rights entrepreneurs who turned women’s rights into a business. However, the human rights NGO elites, who garnered funds from donors to campaign for human rights, have now left the country. Thus, the current protests are not associated with any women’s rights celebrities who had received international awards. While some of the NGO elites have been advocating for engagement with the Taliban, the protesters have questioned whether these NGOs have the legitimacy to engage with the Taliban on behalf of women.

Lastly, the demonstrations for rights and freedom have not been country-wide so far. They have predominantly taken place in the Persian-speaking provinces including Kabul, Balkh, Herat, Takhar, Kunduz, Panjshir, Parwan, and Daikundi. The protests on August 18-19 in the predominantly Pashtu speaking provinces such as Nangarhar, Kunar, and Khost were of a different nature: While the people at the earlier protests demanded the preservation of freedom and human rights, the latter ones saw defiant citizens replace the Taliban flag with the 2004 constitution’s flag.

Technics of the Protests

In showcasing their political audacity to protest against the Taliban’s brutality, the protestors have creatively adopted different techniques to convey their message and mobilize people. One such method is how protesters have used social events with cultural resonance to organize people and articulate their claims. For instance, on December 22, Shab Yalda, several women came together to celebrate Yalda, which was not just an instrumental use of a cultural marker for a political end but also an effort for the preservation of Persian culture and cultural resistance.

On another occasion, Dec 28, a women protester used sign language urging the world to not provide legitimacy to the Taliban government. She said, “The Taliban are killing civilians…please do not recognize the government of terrorists.” The use of sign language was powerful in different ways. On the one hand, it referred to the fact that the Taliban has constrained the freedom of speech and expression, making it so people have to use sign language to express their thoughts. On the other hand, it also indicated the fact that the international community has turned numb and does not listen to the oppressed people in Afghanistan. To help remedy this, and to subvert the mainstream media’s unwillingness to disseminate the protestors’ voices, the protesters have strategically been using social media platforms, including Twitter Spaces and Club House, to run live audio debates.

Claims of Rights and Liberty

It has been visible in the past few months that the protests’ central demands have manifested in the slogan “Bread, Work, and Liberty.” These three terms, while distinct, are deeply interrelated and woven into each other. Liberty is a precondition to many rights, including the right to work, the right to education, and addressing poverty and under-development. As Amartya Sen, the Nobel laureate, argues, “there are extensive interconnections between political freedoms and the understanding and fulfillment of economic needs.” Yet, the right to food is not possible without the right to work. Similarly, the right to work may not be fulfilled without liberty. In order words, these terms complement and ensure positive liberty. The term “positive liberty” was distinguished from “negative liberty” by liberal philosopher Isaiah Berlin sixty-three years ago. According to Berlin, negative liberty is a condition, “[i]f I am prevented by others from doing what I could otherwise do, I am to that degree unfree: and if this area is contracted by other men beyond a certain minimum, I can be described as being coerced, or, it may be, enslaved.”

These protests and slogans are thus manifestations of Persian speakers’ resistance to the Taliban’s totalitarianism that aims to decide the ends for each individual. Ultimately, the protestors’ aims are not just freedom from the constraints, restrictions, and interferences imposed by the Taliban but also positive liberty—the ability to act on one’s own and to be master of oneself. It is only education and work which will enable the women to be their own masters.