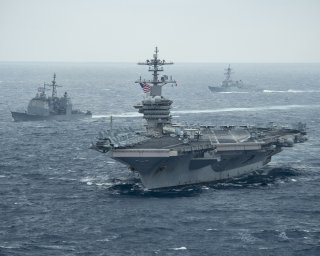 The Navy’s budget and its strategy are increasingly immiscible.

Ever since the Trump administration released the 2018 National Defense Strategy and reoriented American national security toward great-power competition, the U.S. Navy has focused on “four priorities: readiness, capabilities, capacity, and our Sailors.” While the last priority—which entails “develop[ing] a seasoned team of naval warriors”—has taken a back seat with consistent funding cuts, the first three consistently vie for attention from a budgetary and strategic standpoint.

Navy leadership has not conceived an “order of importance” for these priorities that would allow each factor to be sequentially emphasized and achieved over the next few decades. This prioritization and planning deficit has bred confusion, most recently in the Biden administration’s fiscal year 2022 (FY22) budget request for the Navy.

Even months after the administration released the proposed FY22 budget, various House Armed Services Committee (HASC) leaders acknowledge that they are still deciding America’s naval future and funding without knowing “what the composition of that fleet will be and when we’ll get there” as well as “which ships of which class” the Navy needs. Rep. Joe Courtney (D-Conn.), the HASC Seapower and Projection Forces Subcommittee chairman, admitted that without the necessary facts and figures, he and his peers will try to use their “best judgment.”

Unfortunately, that judgment will likely rely on the request’s prioritization of readiness over capabilities and capacity, which runs against prior strategic guidance for countering China and Russia at sea.

Late last year the U.S. Navy (with the Marine Corps and Coast Guard) released an integrated, tri-service strategy for maintaining sea control and power projection as well as the resolve “to compete, deter, and win” against China. The document, “Advantage at Sea,” sought to fulfill its title—first and foremost—by “accelerating the development of a larger, more lethal future fleet.” A technologically capable navy backed with a greater capacity was the best way to compete with China, the document proposed, after extensive wargaming (and a separate study by former Secretary of Defense Mark Esper) recommended a naval force of at least 355 ships, with an emphasis on submarines, smaller combatants, and unmanned platforms.

Although the Navy needs to prioritize capabilities and then capacity, the Biden administration’s naval budget prioritizes current readiness (at 34.2 percent) at the expense of research and development (i.e., capabilities) and procurement (i.e., capacity). The proposed FY22 budget funded readiness at a year-to-year increase of 2.2 percent through shipbuilding cuts of 8.7 percent. It should be noted that the readiness increase occurred despite the fact that the costs of provision for twenty-four or fifty-eight days underway per quarter were the same as FY21. So, for a navy dedicated to renovating itself in size and skill to counter China, a budgetary increase for readiness—with no increase in underway replenishment figures or the number of ships—should raise eyebrows.

So why did the Navy decide to reallocate money from procurement to readiness? Rear Adm. John Gumbleton, the deputy assistant secretary of the Navy for budget, explained the service’s internal prioritization process that led to the ultimate appropriations: “The goal of the department was to balance the first priority, which is investment in Columbia[-class submarine] recapitalization; the second priority, which is to prioritize readiness to deliver a combat-credible force for today; invest in lethality and modernization; and then grow the war-fighting capacity at a rate supported by our budget controls.”

The Department of the Navy deserves commendation for prioritizing the Columbia-class submarine’s recapitalization above all else. It should serve as an exemplar for supporting critical, long-term initiatives regardless of short-term fiscal pressures. The Navy should do more of that, but it appears unlikely. According to Gumbleton, modernization and capacity-building are the Navy’s third and fourth budgetary priorities, despite their strategic significance. And, even then, the Navy can only “grow” its “war-fighting capacity” subject to “budget controls.” Capacity doesn’t win, place, or show in the FY22 race—and it probably won’t fare much better in future years.

The U.S. Navy cannot reach the 335-ship goal by the 2030s with a budget skewed toward readiness. Without a larger and lethal fleet, the Navy cannot realize its “distributed lethality” operational concept, which necessitates more ships. If so, then the Navy may make the outcomes of its war games a reality: China handily defeating the United States in Taiwan—and elsewhere.

Refocusing on What Matters

How should the Navy align future budget requests with its strategic vision? More than a year ago, the Navy proposed a handful of solutions: receiving more money (at other service branches’ expense), changing the methodology for ship counting to include unmanned vessels, eliminating excessive spending elsewhere in the budget, and revising the 355-ship goal. Each idea backfired because they were branded too difficult to achieve.

The Navy should renew this “idea session” to invite tough decisions and suggestions. A new presidential administration and growing recognition of the major threat China poses warrant another effort to increase naval appropriations, cut costs, and re-appropriate the Navy’s budget to coalesce naval strategy with naval funding. Where should it begin?

First, the Navy should enlist congressional support to bolster its topline funding. As America and the rest of the world “pivots” to Asia, it has become strikingly clear that, in the words of Robert Kaplan, “the physical contours of East Asia argue for a naval century.” The Department of Defense’s delicate dance for fiscal parity among the three military departments (Army, Navy, and Air Force) is incompatible with the twenty-first century’s anticipatory battleground: the high seas. The Navy needs more money compared to its fellow services.

The Navy should also expand its unfunded priorities list to Congress by outlining the strategic value each unfunded priority would bring to the force and America’s strategic competition against China. This will underscore the need for more funds by highlighting what a larger topline amount would do for America’s Navy and national security. The FY22 budget saw an increase of only 0.6 percent, barely trailing inflation. The coming contest in the Indo-Pacific region requires a stronger fiscal commitment.

Second, the Navy should eliminate non-critical research and development that do not neuter or diminish China’s growing naval prowess to fund shipbuilding capacity increases. It could also extend the service life of support ships and expand the merchant marine force, instead of building more support ships at the expense of war-ship procurement.

OPTEMPO reductions, however, would likely incur blowback, especially if they’re slated for the Indo-Pacific theater. In that case, the U.S. government should complement an OPTEMPO reduction while still deterring Chinese aggression by relentlessly and vocally supporting Taiwanese independence and encouraging Taiwan to “capitalize on their natural insular advantages” by buying “mines, drones and coastal-defense cruise missiles on mobile launchers,” instead of costly tanks and fighter jets, as the Economist recommended in May.

In his 2018 treatise, On Grand Strategy, Cold War historian John Lewis Gaddis defines “grand strategy” as “the alignment of potentially unlimited aspirations with necessarily limited capabilities.” In other words, the means and ends must match. He presciently warns, “If you seek ends beyond your means, then sooner or later you’ll have to scale back your ends to fit your means.” The Navy’s strategy (or “ends”) surely outpaces its budget (or “means) in scale and scope. To ensure the means and ends connect—and the United States does not annul its decision to compete with China for the international order’s future—the U.S. Navy must prioritize funding a large and lethal force over everything else. Once it does so, it can prioritize readiness. If the Navy does not, and its budget priorities remain unchanged, then the Fleet will be ready, but it won’t matter. It will be outnumbered and technologically outdone.