America Must Understand the Taliban to Change It 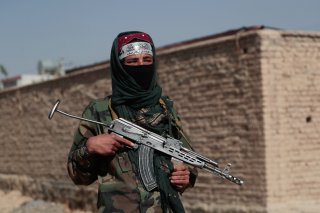 While in Kabul recently, I sipped a ginger chai at the Safi Landmark Hotel as I waited for Zabiullah Mujahid, the Islamic Emirate of Afghanistan’s deputy minister of information and culture, to arrive for an interview. In the mall, customers were hustling for sales support at wedding shops, and mobile phone stores had lines of customers outside while mostly men perused store windows. Mujahid only took a few sips of his chai, but he was attentive to my questions about Taliban governance and the global community’s isolation of Afghanistan. “Listen,” he firmly said, “this country has a long way before a renaissance [occurs], but it will happen in front of the whole world. You’ll see.”

Mujahid’s optimism is not an anomaly; government officials I interviewed had well-choreographed responses claiming that better times are being seeded by the Islamic Emirate. Outside of the Taliban’s estranged bubble, teachers, lawyers, college students, and a few fledging civil society groups couldn’t feel differently about Afghanistan’s future. “There are no jobs; we have no money,” said a lawyer recently fired from the Ministry of Education. Men, women, and children alike beg on the street, saying they haven’t eaten for days. A close friend of mine who was a researcher with a conflict and peace institute based in Kabul said the Taliban shut down his organization because they knew it was supported by USAID and the U.S. Institute of Peace and believed its work portrayed a negative image of Afghanistan.

In retrospect, the winter of 2022 is considered one of the worst humanitarian crises in Afghan history, with little food or clean water available. Without American diplomats on the ground, U.S. special representative for Afghanistan Tom West claimed that the “United States has been the largest donor of aid to Afghanistan to avoid a famine and a shortage of food to civilians.” However, bazaar merchants said emphatically that they have no food supplies to sell.

Since the capture of Kabul by Taliban forces in August 2021, American policy experts have tried to understand the strategic mistakes made in Afghanistan. The newly formed Afghanistan War Commission will identify lessons from America’s war in Afghanistan, seeking to understand the tensions between civilian and military efforts, how the deep-seated corruption sowed by nation-building activities contributed to cycles of corruption, and the mishandling of the exit strategy.

Yet Washington must shift from the past to the present. There is a need to focus on the internal power dynamics of the Taliban: what governs their mentalities; which internal factions are struggling for power; the divergent roles of the Taliban’s religious Deobandism; and, importantly, how to use this information as leverage to shape the Taliban’s development in the region.

Increasing our knowledge of the Emirate’s internal dynamics, divisions, and the complex factors that impact decision-making will not lessen the American commitment to women’s and human rights. Rather, Washington will be better positioned to influence the Taliban and bring them closer to respecting, and perhaps implementing, fundamental principles of democracy.

The Taliban’s internal disputes over inclusivity, governance, multilateral engagement with Western states, and human rights are all heavily split by the different branches of thought of Deobandism, particularly the nuanced understandings formed during the war. A faction of “global-minded” thinkers believes funds from the global community should be invested in Afghanistan’s economy and infrastructure, which is ultimately tied to engaging in diplomacy. Amongst the fighters within the Haqqani clan, however, there is intense pressure to implement the ideals they fought for. The Haqqani Taliban are used to making their own decisions on the battlefield, but they have recently expressed fatigue with the slow pace of decision-making at the Shura council in Kandahar. The balancing act for the Emirate is to appease all the factions at the table while not losing trust in global diplomacy.

Today, the Emirate’s primary leader is a scholar of Islamic jurisprudence named Mawlawi Haibatullah Akhundzada. Akhundzada was trained in Sunni Deobandi Islam, which was originally a reform theological movement established in British India to counter imperialism, counteract forced conversions to Hinduism, and sustain Muslim educational institutions. However, it has evolved into a modern movement with Salafi influences—political aspirations to re-design society according to Islamic principles of law. Akhundzada’s acting defense minister is Mullah Mohammad Yaqoob, Mullah Omar’s son. Abdul Ghani Baradar, the acting deputy prime minister and public face of the Emirate, was the key negotiator with the Americans during the Qatar peace process. Sirajuddin Haqqani is the interior minister, and his uncle, Khalil Haqqani, is the minister of refugees; both are wanted by the United States for terrorism charges. Haqqani fighters protect the outskirts of Kabul, major ministries, and hotel buildings. In addition, the Haqqani clan has a tight network of loyal fighters across the provinces.

Baradar and Sher Muhammad Abbas Stanikzai, the deputy minister of foreign affairs, represent the politically minded actors who want to create a more global-thinking state. Among the top leaders of this faction is the acting prime minister, Mullah Mohammad Hassan Akhund, who was formally the Taliban’s foreign minister in the 1990s. Having lived in Qatar, their practical worldview is connected to their experience traveling the world, leading them to believe that Afghanistan should be integrated into world affairs and global markets. Baradar, Akhund, Minister of Economy Din Mohammad Hanif, and Minister of Finance Hedayatullah Badri are interested in global relationships, as they hope to foster economic ties and see multilateral relations as the key to ending Afghanistan’s isolation. To illustrate their inclusivity, the Taliban claimed they appointed numerous Tajik and Uzbek ministers from Panjshir, Baghlan, and Sar-e Pol provinces. Although they made room for Tajiks, Uzbeks, and Turkmen, there are still no Shias, Hazaras, or any other minorities in the government.

The real power is the Shura—the advisory body for political affairs—of key elder Taliban leaders in Kandahar, where the current chief, Hibutallah Akhunzada, is based. These decisionmakers in Kandahar are primarily Pashtun, but they also have members from the northern, central, and western provinces. In the backdrop are Hamid Karzai, who served as president from 2004 to 2014, and Dr. Abdullah Abdullah, the former chief executive of Afghanistan. Both meet regularly with the Emirate’s leadership in Kabul and the Shura council.

However, within the cabinet are Yaqoob Haqqani and acting Deputy Minister of Defense Abdul Qayyum Zakir, who prioritize the consolidation of military power domestically and stress the importance of protecting Afghanistan’s borders and identifying loyalists of the previous regime, who they believe directly operate with the resistance movement. Other key figures, such as Ministry of Technology and Defense official Maulvi Attallah Omri and Ministry of Justice official Maulvi Abdul Karim, advocate for immediate reforms by instituting “shari’a at all levels of society” to lay the foundations of a conservative, theocratic state. “Technology will make the difference to our defensive abilities and [ensure] we have a holistic Islamic society,” Omri said in an interview.

These former fighters believe their sacrifices during the fight against “foreign intervention” and “Western puppet regimes” were tied to establishing an emirate that implements Islamic idealism. Concurrently, the Haqqani and Zakir factions in the western and southwestern provinces are in the field fighting the nascent National Resistance Front (NRF), and former Taliban fighters in the western provinces are getting exhausted with promises from the Shura council elders and the verbose Taliban bureaucrats in Kabul.

‘Global-Minded’ Taliban On the Move

Perhaps overlooked by most Afghanistan watchers this year was the effectiveness of the “global-minded” Taliban in two instances: a bilateral meeting with Norway in January and the Tashkent Conference over six months later.

Norway hosted a meeting with the Taliban in Oslo aimed at salvaging its two decades of work in Afghanistan’s healthcare, education, and civil society sectors. Many in the West criticized Norway’s dialogue with the Taliban for legitimizing their human rights violations and repression of women’s access to education and employment. However, priding itself as an international mediator, Norway viewed this meeting as a critical step toward bilateral dialogue. In addition to facilitating discussions on humanitarian relief to save Afghan civilians from famine, it was Norway’s first move to test its leadership in post-conflict development and mediation. Notably, the Taliban delegation reported to the Kandahar Shura that the meeting produced positive first steps toward building bilateral relations.

The Oslo meeting was an internal victory for Baradar and Akhund because it undeniably signaled to the internal factions, and the Shura, that their team was able re-build relationships, cooperate with Western leaders, move Afghanistan out of isolation without rattling the Taliban’s ultra-conservative elements, and, most importantly, solidify investment from China, Russia, and Uzbekistan, to name a few partners.

Afghanistan experts in Washington dismissed the Oslo meeting as a publicity stunt for the Taliban to gain international legitimacy and seek funds. However, skeptics ignore Norway’s ability to gain the trust necessary to operate its hospitals, clinics, private schools, NGOs, and specific vocational programs for girls throughout Afghanistan. Under the radar and without interference, Norwegian all-girls schools and educational NGOs have operated in northwestern and northeastern Afghanistan with Taliban support.