Do No Harm: America Must Put Afghans First 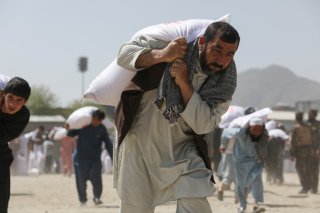 As the United States moves forward in Afghanistan, it should have one primary objective: supporting the resilience of the Afghan people to weather the storms they have in front of them.

The past two decades should make clear that the United States’ ability to promote stability and prosperity around the world does not depend on resources but on ideas and strategy. For twenty years in Afghanistan, neither the goals nor the rationale for the intervention was clear—to the people of Afghanistan, the American public, or the international community.

If we look at the way the United States spent resources, we can see that the objectives were a mix of security, counterterrorism, and building a democratic state. These objectives—at least the way the United States implemented them—were completely at odds with one another. Not only were the people of Afghanistan confused about the objectives of the war, but so too were many senior U.S. military officials with whom I spoke over the years.

The United States replaced strategy with spending and spent on everything under the moon. With each passing year, funding for both the civilian and the military components of this effort seemed to grow, reaching its apogee in 2011. The thought was that increased spending would yield better outcomes—even without a coherent strategy. Yet, as we saw, throwing money at problems without a clear diagnosis or understanding of the context in which the United States was operating only destroyed everything.

Funding reached grotesque levels. The war illustrated the sclerotic tools of U.S. foreign policy, which in Afghanistan channeled funds through myriad U.S. contractors and non-governmental organizations. After decades of working in Afghanistan, every organization was covered in webs of corruption. This is not because Afghans are inherently corrupt, but because the United States was throwing so much money around with such little monitoring or care that it was almost encouraged. Burn rates became supreme.

Since the fall of Kabul, we have not seen the United States or the broader international community take stock of what happened. Recently, Gen. David Petraeus argued that Afghanistan collapsed because the United States was not committed to an extended timeline and thus could not credibly commit to “victory.” It was never clear, however, what victory looked like in this picture. If only there were more resources. If only there was more time. What was missing was a coherent strategy agreed upon by political leaders. The closest thing the United States had to this was the counterinsurgency strategy that President Barack Obama laid out in 2009. As he uttered that strategy, he hedged. Confronted by battles within his own administration over continuing the war or providing more limited counterterrorism assistance along with aid, he decided to satisfy both sides, launching a military surge combined with a civilian surge.

This strategy was intended to keep both the hawks and the doves in his administration happy. The result was a disaster. In many ways, the American war ended in 2009— Afghans understood that the United States was leaving—yet the money kept flowing as if there were no watches. Afghans were confused, and so too were many Americans implementing orders. With no vision and lots of money, America created a catastrophic mess.

Neighboring countries looked at this with great amazement and disappointment. Russia and China, who had been strong initial supporters of the U.S. effort in Afghanistan, began their own dialogue with the Taliban. Even Central Asian republics began to wonder whether the region would be better off without the United States in Afghanistan, as they feared the terrorist spillovers that were growing day by day under the watch of the Americans.

There are two lessons for the future. Across the region, policymakers and diplomats shrug their shoulders at an America that seems adrift. The United States certainly spent resources, including the most important: the sacrifice of more than 2,000 soldiers who gave up their precious lives for Afghanistan. Despite the massive failures in Afghanistan, policy leaders have not been held to answer for these failures. There has been no accountability for the catastrophic failure in Kabul. There has been no accountability for what went wrong in Afghanistan. Without accountability, it will be difficult to build credibility.

The United States and its partners in Afghanistan created great expectations, dumped barrels of money and weapons into the country, and then left, leaving Afghans to clean up the mess as prisoners to a new Taliban regime.

Two decades and a lost war later, the United States does not seem interested in changing course on Afghanistan. It is focused on the same core—and often contradictory—issues that have driven policy before: counterterrorism and democratic values.

The recent killing of Al Qaeda leader Ayman al-Zawahiri in Kabul illustrates that the United States has never taken its eye off these issues, nor should it. Similarly, the United States remains hard at work promoting values in the country. Just this past week, the United States announced a major initiative to support women’s rights in Afghanistan. The almost singular focus on gender issues on the diplomatic side seems to be doing very little to promote positive outcomes. On the contrary, this public shaming of the Taliban over this issue seems to have made it more resolute. Any movement on gender issues is perceived as giving into the United States and its partners at a time when the Taliban seeks to establish that it is a pawn of nobody.

The new Taliban that has come to power is far more dangerous than the Taliban of twenty years ago. Unlike the Taliban of Mullah Omar, which could not be bothered to staff many ministries in Kabul and let the state go to waste, this Taliban believes in state capacity. Taliban 2.0 understands that the key to its success is developing strong ministries, strong government, and ruthless security services to stamp out opponents. This does not augur well for the future.

Consolidating this power will be easy for the Taliban, as it is building on the strong, authoritarian state built by the United States over the past twenty years. Rather than building a viable democracy with constraints on power, the United States worked with Afghan political leaders—who all craved more power—to create a state suited for war. That state was focused on unity of command rather than constraints on power. The United States handed over this centralized state and its bureaucratic machinery to an authoritarian movement, allowing it to implement its dystopian vision with far greater alacrity and capacity than it could have two decades ago.

There are many lessons to be learned from Afghanistan. The question is whether those in Washington and in capitals around the world who contributed to this disastrous outcome over the past twenty years are willing to answer for what went wrong. Twenty years is a long time to fight a war. The war spanned so many administrations and involved so many policymakers and politicians across political aisles. Thus, blame will be diffuse, and accountability will be weak.

As the United States moves forward in Afghanistan, it should have one primary objective: supporting the resilience of the Afghan people to weather the storms they have in front of them. This means supporting individuals and their families rather than focusing on strengthening institutions or transforming Taliban policy. What the United States must now ask itself is the question it should have been asking for the past twenty years: how can we act to do no harm?

There are many ways forward in Afghanistan, but they will require a very different strategy than the one we are currently seeing. It will require the United States to use new tools of economic engagement instead of focusing on women’s rights and fighting terrorism. It will require new thinking about how to use technological tools that do not rely on the Taliban to educate the women of Afghanistan. It will require working in creative ways with Afghanistan’s neighbors who share common interests, including on terrorism and gender issues.

There are many things that the United States can do, but doing them well with the necessary partners requires credibility. This is the one thing that money cannot buy.

Jennifer Brick Murtazashvili is Director of the Center for Governance and Markets and Associate Professor of International Affairs at the University of Pittsburgh.