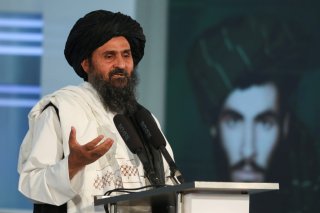 Editor's note: In August, The National Interest organized a symposium on Afghanistan one year after the U.S. withdrawal and the Taliban takeover of Kabul. We asked a variety of experts the following question: How should the Biden administration approach Afghanistan and the Taliban government? What lessons—both from the past year and the two-decade U.S. effort in Afghanistan—might help inform U.S. policy and the issues it should prioritize? The following article is one of their responses:

Over the course of the year since the Taliban seized Kabul and the nearly quarter-century of the movement’s existence, nothing has been so clearly demonstrated as its resistance to change. The present regime in Afghanistan differs little in its goals and strategies from the Taliban regime that ruled as an Islamic emirate from 1996 to 2001 and the insurgency that fought the Kabul government and its allies to victory in August 2021. In and out of power, virtually the same cast of senior figures has headed the movement. The Taliban’s allegiances have remained largely intact, as have its sources of financial sustenance. Moreover, the belief system driving the Taliban’s ultra-conservatism and inflexibility has never deviated far from the Deobandi school of Islamic teachings on which the movement’s leaders were nurtured.

During the past year, the United States and global and regional powers have sought the means to influence the behavior of a regime that very few wanted to see assume power and none trusted. As leverage, they have imposed sanctions on the new regime principally by withholding political recognition and denying direct financial and development assistance. With unusual unanimity, the international community has insisted that the Taliban regime form a more inclusive government, one representative of the diversity of Afghan society’s political, ethnic, and sectarian differences. Most countries have also called upon the Kabul government to relax its highly restrictive social policies, especially against women. If indirectly, sanctions have also put the Taliban regime on notice to cut ties to transnational and regional terrorist organizations.

It seems safe to say that sanctions as instruments of coercion have failed. While eager to receive international legitimacy and foreign assistance, the Taliban regime has stubbornly refused to yield to external demands they perceive as asking them to surrender their monopoly of power and compromise on Islamic beliefs. The Taliban leadership has consistently rejected sharing the fruits of their hard-earned victory with Afghans lacking a similar commitment to the creation of a pure Islamic state. No less today than in the past, the United States and the international community have underestimated the influence of ideology in the Taliban’s decision-making and in motivating the movement’s followers. They have often been surprised by the price the Taliban seems willing to pay and the risks it is prepared to take in sticking to its beliefs and staying loyal to those who share its values.

Overall, along with other powers, the United States often had a poor understanding of the Taliban. Diplomats have frequently taken the movement’s inflexibility as merely a bargaining strategy when in fact the Taliban is demonstrably non-transactional. Agreements are possible, but only on the Taliban’s terms. Negotiations are entered not for the purpose of reaching compromises but in order to provide a forum within which the Taliban hopes to boost its legitimacy and air demands. Interlocutors with the Taliban have often been reluctant to accept that there are unbridgeable issues. Much time over the years has been spent finding moderates among the Taliban leadership who, while usually more open to dialogue, are as unmovable as hardliners on core beliefs.

Engaging the Taliban has also highlighted the difficulty in trusting the Taliban. Throughout the peace process the Taliban often deliberately misled government negotiators and other interested parties as to its real intentions. Thus, after reaching an agreement with the United States in Doha, the Taliban went back immediately on its commitment to begin serious talks with the Ashraf Ghani regime. Once it assumed power, the Taliban reneged on promises to grant amnesty to former government officials, leave media unimpeded, and reopen all girls’ schools. The Taliban regime also regularly left the false impression that it had distanced itself from Al Qaeda and other terrorist and jihadi organizations.

Despite these experiences, over the last year, a modus operandi has emerged between the United States and the Taliban regime. Though full political recognition remains off the table and direct financial and development assistance continues to be withheld, it has been possible to hold serious discussions in areas where the interests of both sides have intersected. These talks have mainly concerned the urgent need for cooperation in addressing Afghanistan’s food and financial liquidity crises. However, the finding that senior Taliban officials had sheltered Al Qaeda leader Ayman al-Zawahiri in central Kabul could destroy what little trust had been built with the Taliban’s leadership and reverse the small steps taken toward normalizing ties.

The United States may now seek new punitive actions against the Taliban’s senior leaders. The most discussed sanction is the removal of a 2019 waiver on a United Nations travel ban on Taliban officials that has allowed fifteen high-ranking officials to travel abroad. Originally intended to allow them to participate in negotiations, the extended waiver has now enabled them to attend international conferences and meetings and allowed them to achieve near de facto political recognition. But the fallout from the Zawahiri affair may be broader. Plans by the Biden administration to release $3.5 in frozen funds from American banks to Afghanistan’s central bank may become more difficult politically. The loosening earlier this year of financial transactions and trade is now unlikely to expand and could be reversed. Although American financial support for international relief efforts is unlikely to be affected, Washington may be less inclined to help fund programs that might contribute to strengthening the Taliban regime. In turn, the Taliban could respond to toughened demands by trying to exercise greater control over international relief agencies’ relief efforts and non-governmental organizations. This, in turn, could affect the willingness of many donors to meet their funding commitments.

These recent developments may indicate how well we have learned the lessons afforded by more than twenty-five years of opportunity to observe and engage the Taliban. Experiences have shown that normal canons of international diplomacy do not apply very well to a movement whose goals and ethics are guided by a rigid set of core religious beliefs. Sanctions and other pressures cannot succeed with a Taliban that feels its faith is being tested. For the foreseeable future, the United States would seem to have no choice but to accept the Taliban for what it is. With American security and strategic interests and the well-being of the Afghan people at stake, we may have little choice but to carve out a narrow, if uncomfortable, relationship.

Marvin G. Weinbaum is professor emeritus of political science at the University of Illinois at Urbana-Champaign, and served as analyst for Pakistan and Afghanistan in the U.S. Department of State’s Bureau of Intelligence and Research from 1999 to 2003. He is currently director for Afghanistan and Pakistan Studies at The Middle East Institute.