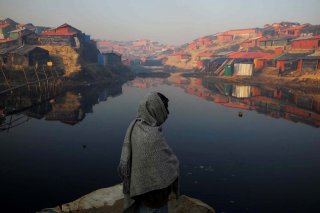 Two of the most important political figures in Bangladesh, Foreign Minister AK Abdul Momen and Ambassador Muhammad Zamir, did a remarkable thing on Oct. 31. They indicated publicly that Bangladesh could diplomatically distance itself from China and Russia for insufficiently supporting Bangladesh on critical issues such as water, refugees, trade, and climate change.

Momen lauded “a new vision” to gain from a group consisting of the United States, European Union, India, and Bangladesh as “a very thought-provoking proposal.” Zamir stated that “to improve the Rohingya situation you should speak out openly and tell China, that stop only supporting Myanmar. And tell Russia, that it’s not enough to talk about things that you’re going to do for others, but do it and show it.” Zamir worked directly with the father of the nation, Sheikh Mujibur Rahman, before the national figure was assassinated in 1975. Zamir is now a member of the ruling political party’s advisory council and a foreign policy advisor of Rahman’s daughter and current prime minister, Sheikh Hasina.

These are the latest indicators of what could be a crumbling of Chinese and Russian influence in South Asia. On Oct. 27, and in the context of recent border clashes between India and China, the United States and India signed a defense pact to share military satellite data. Secretary of Defense Mark Esper and Secretary of State Mike Pompeo attended the historic signing on Oct. 27 that harkened a reversal of decades of India’s commitment to the Non-Aligned Movement (NAM). Since its conception in 1955 and formalization in 1961, India and Indonesia have led NAM. China is an observer state.

There is a saying—when the elephants fight, the grass gets trampled. Bangladesh has in the past sought to avoid getting trampled with some nimble diplomatic footwork. Hasina in her September UN address supported world peace and justice, and an end to exploitation, deprivation, and oppression. She also supported solidarity, multilateralism, democracy, and human rights. She explicitly stated in the speech that “friendship to all and malice to none” is the fundamental principle of Bangladesh’s foreign policy.

Bangladesh is a NAM member, but with the growing strains from water, climate change and refugees, along with pressure from the United States to choose sides against China, a neutral Bangladeshi position towards Beijing and Moscow is becoming less pragmatic.

On water, China is threatening the Brahmaputra River, which it could use for hydro energy, to strengthen flow in the Yellow River, or to divert water to its arid Xinjiang autonomous region. China already has the Zangmu dam on the Brahmaputra, and has plans for three more hydroelectric dams that would cause evaporation of water during the dry season. But some in Bangladesh are seeking a Chinese loan for $983 million to pay a Chinese company for river management on the Bangladesh side of the Indian border. Bangladesh needs river management, and the United States and its allies could draw Bangladesh closer by stepping in with the necessary loan to enable local Bangladesh river management companies to take the lead. The international community should also develop and enforce international law on transboundary rivers, namely that upstream countries should not be allowed to decrease flows to downstream country people who have depended on those flows for centuries.

India has dammed the Teesta River, and in response, and due to increasing climate-induced cyclones and monsoon flooding that displaced millions, Momen is negotiating for a fair water deal on seven transboundary rivers. If Bangladesh is to be drawn towards the West, then the United States and Europe will likely be asked to support Bangladesh water rights upon which China and India are intruding, as well as to compensate Bangladesh for damages due to climate change.

On the Rohingya crisis, the US, EU, India, and allies will likely be asked to work harder to help return the 1.1 million Rohingya refugees who fled across the border from Myanmar. Momen has obtained the strong cooperation of, most recently, Canada and the Netherlands on the Rohingya. The foreign minister apparently lobbies most diplomats with whom he meets, including this month those he met from ASEAN, Thailand, Philippines, and Japan, for stronger support of the voluntary, early, and dignified Rohingya return.

Professor Mohshin Habib of Swinburne University of Technology in Australia chaired the presentations that the foreign minister and ambassador spoke at on Oct. 31. His research found that Myanmar’s military action resulted in the murder of twenty-five thousand Rohingyas and rape of nineteen thousand Rohingyas. Myanmar and China promise Bangladesh endless cheap talk, negotiations in Beijing where China has the home advantage, and Rohingya repatriation at a rate that would take decades to complete. Time is on Myanmar’s side, and along with China, it is apparently trying to use refugees as a weapon to destabilize Bangladesh while clearing the Rakhine state for internal colonization and hydrocarbon exploitation. For this, Habib estimates that Myanmar owes compensation of $5.4 billion U.S. dollars.

The international community could improve relations with Bangladesh by joining it in taking Myanmar to the International Criminal Court, imposing economic sanctions on Myanmar, and if all else fails, considering military options for the Rohingya’s voluntary and dignified return. Until that time, Bangladesh has few good options other than to house the Rohingya in a variety of settlements, including the island of Bhasan Char, which is raising human-rights concerns. These human-rights issues are the responsibility of Myanmar first and foremost, but the rest of the world is also responsible in that we have done too little to end what amounts to genocide according to the UN definition.

An Opportunity for Closer U.S.-Bangladesh Cooperation

While the United States and Bangladesh have been on opposite sides in the past, the world’s geopolitical architecture has fundamentally reversed with China’s rise and reach for hegemonic power. It would not be inconsistent with Sheik Hasina’s multilateralism for Bangladesh, as India has done, to draw closer to those countries that are best positioned to protect democracy and human rights on a global scale, namely the United States, Europe, India, and their allies. In return, these countries will likely be asked to respect and defend Bangladesh’s water rights, support Bangladesh on the Rohingya issue, increase trade, investment, and development funding to Bangladesh, and increase funding to mitigate the effects on Bangladesh of climate change.