The Biden Administration Wants to Ignore Its Most Obvious Problem: Russia 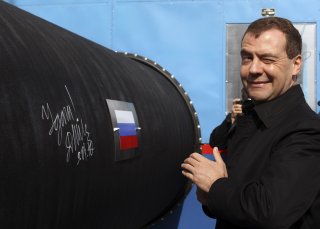 I have a bad feeling about where things may be headed in the Eurasian space. I know that many are celebrating the apparent success of the summit between Presidents Joe Biden and Ukrainian president Volodymyr Zelensky as an important step in putting the U.S. relationship with post-Soviet Eastern Europe back on track. What worries me, though, are the echoes and rhymes that remind me of 2008—just prior to the Russian incursion into Georgia.

Ukrainian government officials—and most members of the informed public—reading the various (public) communique and statements from the U.S.-Ukraine summit would conclude that the United States reaffirmed its partnership and even quasi-alliance—with Ukraine. This makes apparent commitments of support designed to improve Ukraine’s position against Russian-backed separatists in the east (and the larger threat of the regular Russian military) and to deal with the real costs Ukraine will incur if and when the Nord Stream II pipeline becomes operational. The pipeline will allow for more Russian energy to be exported without having to use the Ukrainian transit infrastructure. To me, the U.S. position appears to be carefully crafted to give the appearance of strong support—in an effort to try and deter Russia from taking further military or geo-economic action against Ukraine—but with enough loopholes and offramps for the United States to avoid having to take action.

As with the Georgians in 2008, my concern here is that the “interpretation gap” could manifest itself again. The Ukrainians could overestimate the level of U.S. backing, take steps or even be lured into a situation with Russia. We’ll then see a repeat of 2008, where U.S. statements about Georgia as a close and stalwart ally of the United States who could rely on U.S. support were replaced with criticisms of Georgia’s “recklessness” and willful misinterpretation of U.S. promises. This occurred after Moscow tested the depth of that U.S. commitment and, along with Tbilisi, and found it wanting. Russia is already quietly feeding concerns about U.S. credibility among its European partners in the aftermath of the Afghanistan evacuation; could there be an incident with Ukraine also designed to challenge the credibility of U.S. and Western guarantees?

Here, it may be important to revisit “Russia mobilizing against Ukraine in the spring” concerns. The prevailing narrative is that Russian saber-rattling was defused by deft U.S. pressure and signaling, which restrained Russian president Vladimir Putin’s arm. Of course, prior to the Russian incursion into Georgia in 2008, there had also been similar mobilizations, movements and incidents. So it may be more of an open question as to whether Moscow was “deterred” or simply operating according to its own strategic logic. Also, perhaps declaratory statements from Washington may not carry as much weight as we think.

This raises another concern, which is connected to Belarus. We in the United States tend to focus on avoiding major, dramatic shifts. There was no major incursion into Ukraine in the spring, so we describe it as a “crisis averted.” But those moves laid the basis for more quiet, subtle shifts in the balance. Similarly, when it comes to Belarus, the dramatic concern was that Russia was on the verge of absorbing or annexing Belarus. Aleksandr Lukashenko left Moscow from his recent meetings with Putin to return to Minsk able to claim that, after all, no one has “swallowed” Belarus. But the fine print on some of the signed agreements lay the basis for a salami-slicing strategy whereby there is no one dramatic change in the Russia-Belarus relationship. In fact, there is nothing to grab headlines or create a dramatic front-page picture except where Belarus's status vis-a-vis Russia will have been irrevocably changed.

One of those areas of change can be seen in the creation of a unified energy space. This leads to another area of concern: a possible looming energy crisis in Europe. The United States has been hoping to keep Ukraine as the main transit country for gas to reach Europe (while pushing alternatives). Moscow is now engaged in a game of “natural gas chicken.” Russia is not exporting a cubic meter more of gas through Ukraine than is required by the agreement reached with Germany. This is because Russia hopes that concerns about low reserves in Europe will create pressure to get Nord Stream II (which is now completed) certified and open for business. At the same time, Gazprom and other Russian gas producers have been shifting deliveries to Turkey and China. Having failed to stop the physical construction, the U.S. sanctions toolbox is designed to inhibit the technical steps needed to certify the line. What Russia seems to be hoping for, though, is an energy crisis in Europe where Washington, not Moscow, is the cause.

As much as many people were extremely critical of steps that the Biden administration has taken to end Nord Stream II as an item of dispute between Germany and the United States, there is a strategic logic to that decision. At some point, in the name of trans-Atlantic solidarity, the United States may ask its European partners to take economic losses in order to pursue common actions vis-a-vis China. The thinking was that imposing costs on European economies over Nord Stream might torpedo efforts to ask for additional sacrifices vis-a-vis China.

Finally, we come to the latest iteration of the Russia-China relationship, in the recent phone dialogue between Putin and China’s President Xi Jinping. In a moment that no doubt scared many Asian states, the Chinese read-out of the call seemed to indicate that Moscow now supported Beijing’s position on the South China Sea and on Taiwan. The Russian Foreign Ministry later clarified the point that Putin was expressing support for outside/external actors (e.g. the United States, other NATO states, etc.) to not get involved while maintaining neutrality on the merits of the competing claims. Still, the message seems clear, particularly to India and Japan: if they are inhibited from further investments in Russia to avoid triggering U.S. sanctions, then they run the risk of Russia moving closer to China to the detriment of their interests. As with German lobbying on Nord Stream, New Delhi and Tokyo may decide to push back on U.S. economic pressure on Russia, particularly on Ukraine, in order to keep Russia from fully moving into China’s strategic embrace.

Melinda Haring has adequately summed up the Biden administration view—a “White House focused on Covid-19, China and climate change . . . that decidedly wants to ignore Russia.” Yet Russia seems to be getting ready to send a clear signal of “I'm not going to be ignored, Joe.”

Nikolas K. Gvosdev is a contributing editor at the National Interest