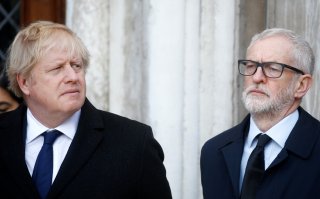 It seems strange now but in 2019, Britain was almost ruled by a man whom the majority of British Jews considered an anti-Semite, whose foreign policy positions were closer to the leaders of Russia and Iran than the president of the United States, and who thought that when Russia invaded Ukraine in 2014, it was NATO's fault.

All that changed on December 13, when the country gave Boris Johnson’s Conservatives a landslide majority.

Johnson's career in frontline politics is over. He has resigned as the leader of his party and a successor as prime minister will be chosen soon. Since December, his approval ratings have been in decline and many in Britain and America are delighted to see him go. His time in office was dominated by the pandemic and, in legislative terms, he does not leave an enormous legacy.

As Johnson leaves office, however, we would be remiss to forget the lasting impacts of his time as prime minister. The decisive defeat of Jeremy Corbyn's Labour Party, which in 2019 suffered its worst electoral result in eighty years, is a fitting legacy.

To American readers, perhaps, Corbyn seems superficially benign. He talked in the same cadences and with some of the same preoccupations as Bernie Sanders. He successfully cast himself as a man of unshakeable principle.

But principle shades into dogma very quickly, and Corbyn was nothing if not dogmatic.

Corbyn dedicated much of his time advocating for Palestine over the past half-century. Many would consider this evidence of his dedication to peace. But Corbyn favored not the mainstream Palestinian politics of Fatah, but the terrorism of Hamas, which he called “an organization that is dedicated toward the good of the Palestinian people and bringing about long-term peace and social justice and political justice in the whole region.”

Corbyn was a frequent guest on Russian state television, and when Russia poisoned two exiles in Salisbury in 2018, killing another innocent woman, Dawn Sturgess, Corbyn suggested sending the nerve agent to Russia to see if they recognized it. When the Organization for the Prohibition of Chemical Weapons declared that Russia most likely carried out the attack, Corbyn said and did nothing.

When Russia and the regime of Bashar al-Assad attacked an aid convoy in Syria, Corbyn refused to believe it.

When the Syrian regime used chemical weapons in August 2013, Corbyn appeared on Russian state television to claim that the rebels must have gassed themselves.

This is a smattering of positions taken as the result of a rigid ideology.

Corbyn believed that the United States and by extension, Britain, NATO, and other international institutions were the great evils in the world. They were opposed, in his mind, by the anti-imperialist states: Russia, Venezuela, Cuba, Syria, Iran, and even China. When Iran funded and armed terrorist groups like the Houthis in Yemen, and militias within Iraq, they became anti-imperialist, too.

This ideology inexorably led a man of personal passivity, a man who considered himself peace-loving, to advocate for and to embrace many acts of senseless violence carried out by the enemies of democracy and peace.

Sanders, whatever else he has done, has never done this.

British voters do not, as a rule, vote on foreign policy. They vote on domestic issues and the economy, and—according to some polls—Corbyn's domestic agenda was popular. After Corbyn's defeat in 2019, former Labour members of parliament said in large numbers that many of their constituents had found it impossible to vote for a man who so consistently found himself in league with the country's sworn enemies.

But Corbyn's apparent lack of patriotism was not enough to ensure the defeat of his ideas. His party did unexpectedly well in 2017 facing the less than charismatic Theresa May. It took another campaign and another candidate to beat him. Johnson was that man.

Johnson was able to mobilize popular sentiment to ensure that general unease about Corbyn's views of what the United States and Britain fundamentally are translated into a true defeat of his ideas.

For this, the United States and Britain ought to be grateful, even if they are unaware of it.

If Corbyn had not been defeated, and a successor determined to reverse his party's annihilation had not been chosen, the opposition party or even Britain itself could now be led by a man who considers the president of Ukraine unworthy of his admiration, as Corbyn has said; by a man who believes the reason Russia keeps invading Ukraine is largely NATO's fault; and who, when confronted with evidence of Russian war crimes, is inclined to let the Russians mark their own homework.

Britain and its friends ought to be deeply relieved that this is not the case. And we have Boris Johnson to thank for that.