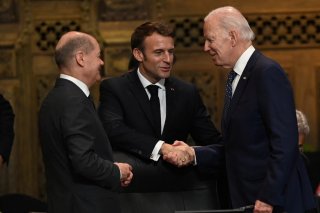 European Council president Charles Michel’s impending visit to China is indicative of a worrying trend in Europe’s approach to Eurasian competition. French president Emmanuel Macron, despite stabilizing his position in recent months, repeatedly broke ranks with the United States and the United Kingdom and advised some sort of conciliation with Russia. German chancellor Olaf Scholz, meanwhile, has been a consistent voice for conciliation as well, including advocating for the free transit of goods between the three Baltic states, all of which are EU members, and Russia. Boris Johnson’s remarks that neither France nor Germany seriously believed in the Russian threat, and moreover, that Germany specifically hoped the conflict would end with a rapid Russian victory to mitigate economic damage, fit with this broad pattern of behavior. It is increasingly apparent that the Western European powers remain unready to engage in protracted Eurasian rivalry. Therefore, the United States should consider how to leverage European strategic weight most effectively, and whether New Europe might prove a more effective long-term partner than Old Europe’s traditional powers.

Western Europe’s equivocation and lack of clarity on China policy is the culmination of long-term geopolitical trends. Indeed, Franco-German, and to a lesser degree British, policies toward China stem from strategic choices equally apparent in Europe’s Russia policy. Old Europe is not blind. Rather, it operates under a set of grossly misguided strategic assumptions that contributed to Russia’s invasion of Ukraine and significant Chinese aggrandizement.

The Franco-German gambit for strategic autonomy runs back to the Cold War. France’s withdrawal from NATO’s unified command structure—admittedly after a harsh and senseless rebuke from the United States in 1956 and Anglo-American unwillingness to cede to Charles de Gaulle’s great power ambitions—signaled a return, however tentatively, to Old Europe’s strategic logic. European strategic autonomy is an attempt to replicate the pre-twentieth-century political balance. This is impossible in toto. From 1850 to 1945, power spread outside of the European continent. Of the twentieth century’s dominant players, only three—Britain, Germany, and France—were wholly European. None survived as primary geopolitical forces after 1945. It was and remains impossible to return to the 1850s, when the European strategic balance was the sum of the international order, or even to the 1890s, when the European balance was the most significant aspect of the strategic picture, albeit not the only aspect of it.

However, a United Europe could have asserted its autonomy and had a seat at the table when engaging with the other great powers, namely the United States, the Soviet Union, and China. Ironically, Franklin D. Roosevelt’s Big Four could return with only slight modifications.

Germany’s interest pointed to the same ignis fatuus as France’s. National redefinition is extremely difficult and although nations are historical constructs, they retain significant power in the minds of men. The world wars scarred German psychology but only under Konrad Adenauer did West Germany pursue a forthright Atlanticist policy fashioned intentionally to break Germany from its acquisitive past. Beginning in the late 1960s, Social Democratic chancellor Willy Brandt’s Ostpolitik shifted Germany away from the Atlantic alliance. The German military, of course, remained wholly engaged in NATO. However, Germany’s political authorities became increasingly convinced that only odious Atlanticist ideological purity prevented a rapprochement with Eastern Europe and, in turn, the Cold War’s conclusion, the reunification of Germany, and most importantly, the return to a practically autonomous European sphere. In this respect, German and French interests were aligned.

The Franco-German quest for autonomy did not end with the Cold War’s conclusion. Rather, both powers employed their economic and political clout to box out the United States. The disputes between Berlin, Paris, London, and Washington over Yugoslavia and Iraq were less about substantive policy than political assertiveness. The United States embraced post-1991 globalization with sunny hopes for market democratization that would slowly integrate all states into the rules-based system, moderate their polities, and leave only a handful of recalcitrant powers on the fringes. North Korea, Belarus, Iraq, Libya, and Iran would be bizarre holdouts against the logic of history. But why would Europe indulge in these same fantasies? Why would Old Europe, so ravaged by war and vulnerable to non-European domination, believe that globalization would end political rivalry? Was Norman Angell right after all?

Old Europe pursued globalization not because of deferred democratic dreams but for traditional power-political objectives. Globalization was a path toward autonomy and by disaggregating economic power and eroding the United States’ position, European powers could carve out a role as strategic balancers. In turn, the very definition of strategy changed. There was no need for traditional military capabilities since the long night of the Cold War had proved that traditional military capabilities were irrelevant. For Germany especially, it was Ostpolitik that ended the nightmare, not nuclear or conventional arms.

This explains the virtual glee with which France and Germany reacted to Russia’s invasion of Ukraine in 2014. Make no mistake—Berlin and Paris saw this as an opportunity, not an affront to the international system. It was an unmistakable chance to shake free of the United States and demonstrate to Russia that the Euro-Atlantic need not be shackled to the Amero-Atlantic. Hence, the Minsk agreements were concluded, in which Russia’s invasion of Ukraine was treated as a primarily civil conflict and Russia was deemed a neutral third party.

The Russo-Ukrainian War has presented no cause for optimism that France and Germany have shed their delusional quest for strategic autonomy. Indeed, Boris Johnson’s comments indicate just how deep-seated that desire remained as of February 24. Old Europe almost certainly wished Ukraine to roll over and die, ending this unsightly episode as rapidly as possible, and ideally removing the most obvious flashpoint that kept the United States so engaged in European affairs, thereby elevating New Europe far beyond its station. After all, Poland, the Baltic States, Romania, and Bulgaria—what business did they have in determining European affairs? What was their right to keep the United States engaged in European questions?

Despite much fanfare regarding Germany's public about-face and Macron’s speeches on security affairs, Old Europe has done little to resist Russia in Ukraine. Germany is far behind Poland and the United Kingdom in providing military assistance to Ukraine while France’s contribution is a minuscule fraction of Germany’s. Neither has spent cash to alleviate American financing for the war. Rather, there is much hand-wringing, many consultations and conferences, and potential pledges for long-term reconstruction assistance with almost no actual policy movement.

It must be said that Old Europe might no longer be hedging against Russia. The February invasion of Ukraine has been such a visible stinging rebuke to Europe’s Russia policy that it can no longer hide behind a supposed penchant for diplomacy. Yet, its actions show very little consistent movement and its China policy slouches toward yet another hedge.

Another dust-up looms. Skyrocketing energy prices have undermined European industry. The EU blames American price-gouging for the drastic gap between U.S. and European prices. In reality, U.S.-European contracts are relatively fixed. It is the European energy companies that are reaping windfall profits, exploiting Europe’s inability to set a unified energy policy and regulate demand across the continent. This is combined with fears over the Inflation Reduction Act, the Biden administration’s big-ticket subsidy for green technologies. The United States has been accused of Chinese-like protectionist practices. European producers, faced with high energy costs, fear rapid de-industrialization. It took Europe months to even approximate a coherent Russia policy. It took just days of Franco-German meetings to produce a potential subsidy package.

In this case, the Europeans have a partial point. European inability to harmonize demand is a European failure. But the Inflation Reduction Act will not reduce inflation and does pose a legitimate threat to European industry. The Biden administration would do well to consider a broader package that integrates European economic concerns. Yet the energy question remains fundamental—European industrial actors are exiting the market because of high energy costs—and there is little the United States can do to improve the situation, apart from export at even more extravagant record-setting levels and, it must be noted, relatively reasonable prices. Indeed, this new source of tension simply confirms the deep-seated friction between Old Europe and the United States.

Scholz dashed to China just weeks after Xi Jinping was confirmed as chairman-for-life, CEOs in tow, in an Angela Merkel-esque display of obsequiousness. He has warned of China’s vulnerability to the “middle-income trap,” the macroeconomic position in which a country no longer provides cheap unskilled labor at competitive prices. Still, he remains unable to break into the high-tech consumption model that sustains Organisation for Economic Co-operation and Development (OECD) states by keeping relative incomes stagnant and moderate. Macron’s bilateral engagement with Xi at the G20 summit in Bali, Indonesia produced very little of substance. France has yet to pin down a consistent China line and now Michel will travel to China to meet with Xi.

What might Europe want from China? In the short-term, there is an increasing conviction, more a deep-seated wish, that Beijing can pressure Moscow to either end its war in Ukraine or at least refrain from nuclear use. This well-intentioned proposal, however, masks a darker reality. For this to work, either China will have to twist Russia’s arm hard enough to force the Kremlin to limit its war aims or transmit inducements to Russia that it has not earned through its battlefield performance. In either case, it is unspoken and undeniable that China must receive inducements of its own for engaging explicitly in an issue it has so far avoided publicly with great care. Either China alone must be bought or China and Russia must be bought for a Beijing-Moscow-Washington-Brussels framework to be effective.