Can America Live with a Failed Haitian State Next Door? 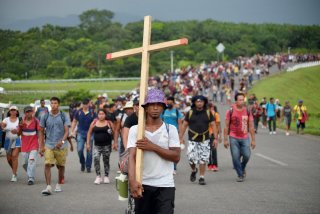 In the wake of the widely criticized U.S. withdrawal from Afghanistan, President Joe Biden signaled that going forward U.S. foreign policy would be guided by a careful consideration of U.S. interests. He further suggested that the nation-building effort in Afghanistan had been misguided and that his administration would not be drawn into quixotic projects like the transforming other nations. Haiti, however, is exactly the kind of country on which the United States should concentrate its attention. It is approaching failed state status. It is also a crisis that has direct and undeniable implications for the United States.

In the past few months, Haiti has experienced a presidential assassination, an earthquake, and hurricane. The central government has lost nearly all credibility and its ability to govern has all but evaporated. Armed gangs reportedly now control more than 50 percent of the national territory. The recent kidnapping of seventeen missionaries, all but one of whom are American citizens, is just the latest indication of the wholesale breakdown of law and order in the country.

The U.S. Department of State has issued a level 4 travel advisory (“Do Not Travel”) that states upfront that kidnapping is a major security problem. This may be helpful for some but will not dissuade from travel all of those who might wish to help the suffering population.

Even more importantly, for the United States, it will not persuade Haitians to stay home. The 16,000 migrants who showed up on our southern border will likely prove to be only the first wave of intending migrants if the circumstances on the ground in Haiti do not improve. The fact that most of the Haitians recently trying to cross into Texas from Mexico came from third countries rather than Haiti itself does not change that reality. More to the point, the fact that several thousand were returned to Haiti will not convince the desperate still on the island to forego travel. Many more of the 16,000 were admitted than deported. For those fleeing chaos, hunger and violence, the odds of being admitted look pretty good especially now that the Biden administration has reversed some of the Trump-era policies designed to block undocumented migrants from entering U.S. territory.

So, what is to be done? The United States has intervened in Haiti multiple times without achieving sustainable progress. After the democratically elected president, Bertrand Aristide, was overthrown in the early-mid-1990s, the United States pressured the military regime of General Raul Cedras to abandon the presidential palace and leave the country. Washington then worked with the United Nations (UN) and an international force to restore Aristide to the presidency. When Aristide was forced from power a second time in 2003, the United States worked with the UN, the Organization of American States, and an international military force to rebuild the country’s democracy. The United States did not commit troops to that second effort but did contribute hundreds of millions of dollars. That multinational campaign was successful—at least temporarily. A voter registry was established, elections were held, and a newly elected president inaugurated.

Unfortunately, on January 12, 2010, a massive earthquake struck Haiti killing thousands, maybe as many as 200,000, and collapsing most of the country’s infrastructure. Despite massive assistance from the international community, Haiti has been struggling to recover ever since.

Notwithstanding continuing (albeit dwindling) foreign assistance, however, the government in Port-au-Prince has not been able to satisfy the country’s demands for more economic dynamism nor has the government been able to rebuild the country’s infrastructure, eliminate malnutrition, limit drug trafficking, or control violent crime. Even free primary education is not yet universally available. Indeed, life in some parts of Haiti these days increasingly resembles the worst of times in the Somalia of twenty years ago. This should be unacceptable to the United States and to the region.

For the moment, the first priority for the United States must be the safe return of the kidnapped U.S. missionaries. Coordinating that effort will largely fall to the U.S. Federal Bureau of Investigation. We should not fool ourselves, however, that we will be able to ignore the desperate situation in Haiti even once our people have been freed whether through negotiation or rescue. Given recent developments, it should be clear that much more will need to be done to improve life on the ground.

A strategy will, of course, need to be formulated with what remains of the beleaguered government of Haiti as well as with Haitian civil society. The recently negotiated Montana Agreement supported by dozens of civil society groups outlines much of what needs to be achieved. The United Nations, the Organization of American States, and some of the other nations with historically strong and deep ties to the country—including and especially Canada, France, and Brazil—will likely be as interested as the United States in helping Haitians to find a way forward. The countries of the Caribbean should also be consulted. The international faith community and the NGOs that have been active in Haiti for years can contribute as well. They are an invaluable repository of knowledge about the country’s most urgent humanitarian needs.

Restoring the rule of law will, of necessity, be an initial goal and a tough one to achieve. Wresting power from the gangs will not be easy. Another multilateral force such as the one that was constituted and deployed to Haiti after Aristide fell the second time may be required. This too will be a challenge, not least because the record of the last multinational force, known as MINUSTAH, was controversial among the Haitian people. Today Haitians are, as a consequence, deeply suspicious of internationally-led security campaigns to rescue the country. Some sort of force will nevertheless probably be necessary. That said, the United States would not necessarily need to commit troops. The last time the United Nations organized a peacekeeping force for Haiti we contributed diplomatically and financially without sending troops. At the same time, it is true that probably no other country will be ready and willing to position a fast reaction force in or near Haiti as order is being restored.

The key point is that Haiti urgently needs help to rebuild its economy and political institutions before the situation gets worse and the United States should play a central role in organizing the effort. If, in Haiti, past is prologue, it is clear that a multinational commitment to render the necessary assistance will not coalesce absent the involvement of the United States. It is also clear that if the current crisis persists there will be even greater suffering in Haiti, problems for other countries in the region, and a flood of refugees heading for the United States.

During a long diplomatic career, Patrick Duddy served as the U.S. ambassador to Venezuela and Deputy Assistant Secretary of State for the Western Hemisphere. Retired from the U.S. Department of State, he now teaches at Duke University where he is also director of Duke’s Center for Latin American and Caribbean Studies.